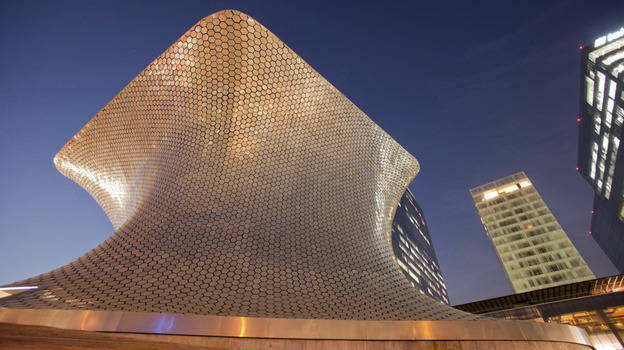 The Soumaya Museum in Mexico City was designed by Carlos Slim's son-in-law and houses Slim's collection of more than 65,000 pieces. It is dominated by works from European and Mexican artists.

In Mexico City, the world’s richest man has just opened a new museum to showcase his extensive European and Mexican art collection. Telecommunications mogul Carlos Slim calls the museum a gift to his country.

The glimmering, modern building is already being hailed as a new landmark in Mexico’s capital, but it is also being criticized as the pet project of a man who knows more about business than art.

Slim’s new Soumaya Museum is a windowless, metallic, six-story structure shaped like a surrealist hourglass. Local critics have compared the building, which was designed by Slim’s son-in-law, to Frank Gehry’s Guggenheim in Bilbao, Spain.

It shimmers like the Guggenheim, but it’s crammed into one of Slim’s commercial real estate developments next to a shopping mall, an office tower for Slim’s cellphone company and blocks of new condominiums.

Inside, a bronze cast of Rodin’s The Thinkerdominates the open, airy lobby. There’s also a colorful mural by Diego Rivera pointing toward the bathrooms.

“This is the last mural of Diego Rivera,” says Alfonso Miranda Marquez, the director of the Soumaya. The museum is named for Slim’s late wife, Soumaya, who died in 1999.

Slim’s collection of more than 65,000 pieces is dominated by European artists, including El Greco, Van Gogh, Matisse, Degas and Picasso.

“This is for the impressionists,” Miranda says. “It’s very difficult to see these artists in Latin America. It’s impossible to travel, to be so close to Manet or Renoir. This is also one of the highlights of our collection.” 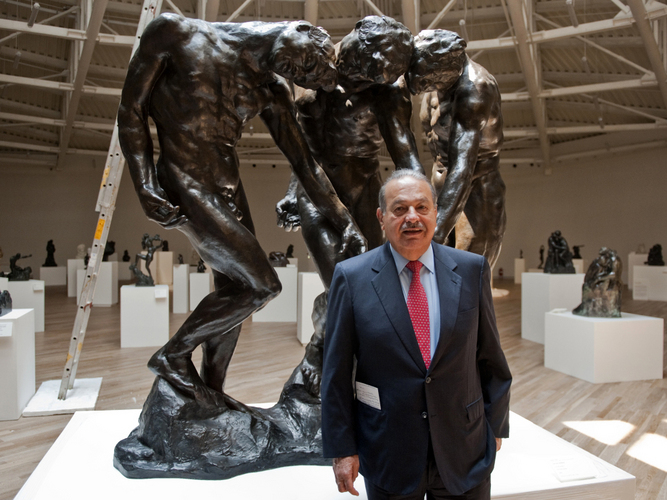 Carlos Slim invested more than $800 million in the Soumaya Museum, the second museum opened by the telecommunications mogul. Here, he stands with Auguste Rodin's The Three Shades on March 28, the eve of the opening.

Miranda says his goal is for the museum to become a cultural icon in Mexico City and present a different side of the capital.

“OK, we have problems of pollution, problems of violence. But you can see here there are people here, living and enjoying art,” he says. “We are not afraid under the bed. This is another idea for Mexico and for Latin America.”

But there is some criticism that rather than representing an artistic step forward for Latin America, the museum, commissioned by the richest man on the planet, instead represents part of what’s wrong with the region.

Slim amassed much of his fortune after gaining control of the Mexican telephone monopoly when it was privatized in 1990. In April, Slim’s Telcel mobile phone company was slapped with a $1 billion fine by Mexico’s antitrust commission, the largest fine ever handed down by the agency. Telcel is appealing the matter.

ames Oles, a professor of art history at Wellesley College and an expert on Mexican art, visited the Soumaya Museum last month, just after it opened.

He says things are displayed in the galleries simply because Slim owns them, not necessarily because they’re great works of art.

For instance, there’s a large bronze cast of Michelangelo’s Pieta on the stairs from the lobby leading up to the second level. 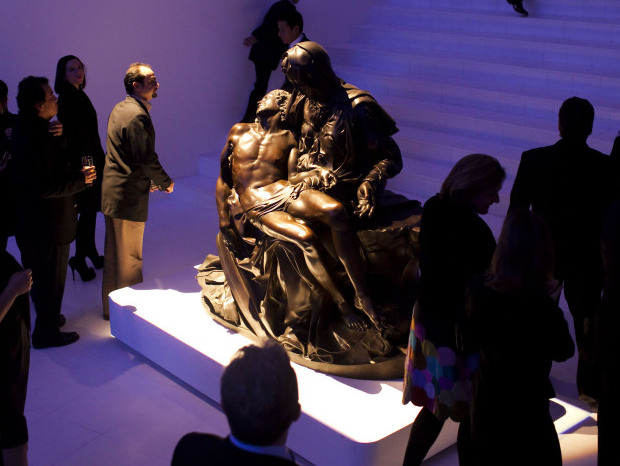 A bronze cast of Michelangelo's Pieta is on display at the new Soumaya Museum in Mexico City. The original work is a white marble sculpture. "It's unclear to me why anybody would want a bronze version of it, and why you would display such a thing in an art museum, since it is neither a Michelangelo nor a close approximation of the Michelangelo," says art history professor James Oles.

“Michelangelo’s Pieta is a white marble sculpture,” Oles explains. “It’s unclear to me why anybody would want a bronze version of it, and why you would display such a thing in an art museum, since it is neither a Michelangelo nor a close approximation of the Michelangelo.”

Oles says Slim has some fine art but that much of his collection is made up of minor and mediocre pieces by big-name artists. As an art collector, Slim has the same reputation that he’s had in business — he’s always hunting for a bargain.

“You know, he’s one of the only people in the world who could actually afford great, great art at the cost of great art,” Oles says. “I will tell you there are many works of art hanging in the Soumaya Museum that I could afford on my professorial salary.”

Oles says the opportunity for Mexico to get a new art museum that rivals the best in the world, in his opinion, has been lost.

While the Soumaya Museum has drawn criticism from some in the art world, it’s been extremely popular with ordinary Mexicans. Admission is free, and tens of thousands of people have flowed through the museum’s doors in the weeks since it opened.