On Mexico’s Pacific Coast, long a place of low-key glamour and fantastical, free-thinking retreats, a new generation of bohemian-chic resort hotels has sprung up on the Costa Alegre.

André Breton, the French-born leader of the surrealist movement, called Mexico “the most surrealist country in the world” when he visited in 1938. I’m here on the Costa Alegre, a blissfully underdeveloped swath of Mexico’s Pacific coastline, to check out its new conceptual luxury—a monied descendant of Breton’s world that takes cues as much from infinity pools as from the dreamy fantasy of a Frida Kahlo painting. 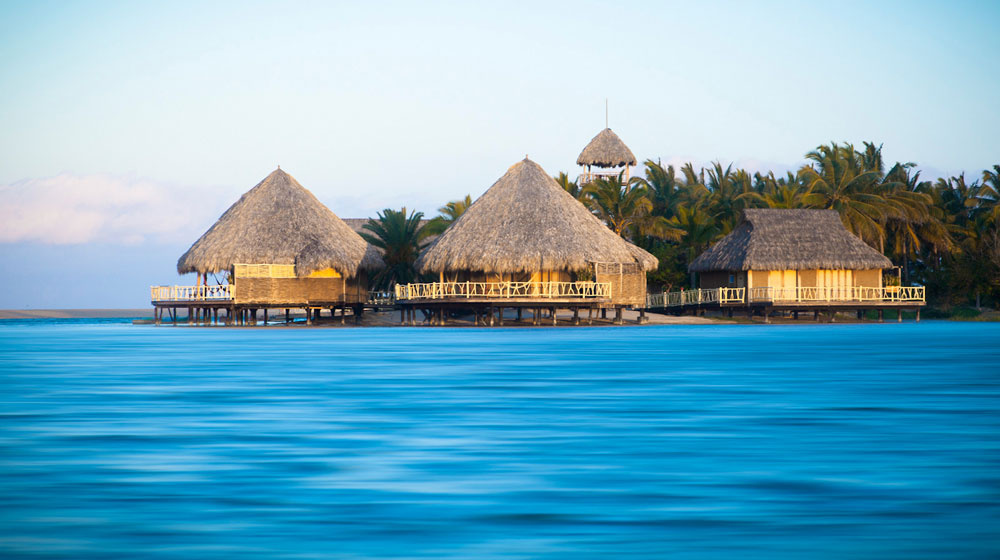 So naturally I’m game to hunt for Hotelito Desconocido (its name means “Unknown Little Hotel”) working off vague directions e-mailed by the reservationist. “Hotelito…somewhere in the Pacific,” the website read. Needless to say, I get very lost: pocked dirt roads, grazing donkeys, bucolic fields, cactus scrapes on the rental car. Finally we (my travel companion is a friend from New York City) arrive at an unmarked, fortress-like gate manned by armed guards who stare blankly when I give them my name.

I’ve always loved this stretch of Mexico for its unabashed decadence. Anchored by Puerto Vallarta, the Costa Alegre spans south of Banderas Bay into the states of Jalisco and Colima, along Highway 200, a.k.a. Carretera Pacífico. Since at least the 1960’s (when The Night of the Iguana, starring Richard Burton and Ava Gardner, was filmed in Puerto Vallarta), the region has attracted utopian leisure visionaries, naturalists, surfers, and eccentrics of all tan lines. They have found a tolerant local culture that includes the Huichol Indians—who make trippy peyote-ritual crafts, some with fluorescent pom-poms—and the lush, welcoming beauty of bougainvillea and grassy fields, night air that feels like silk, and a climate so near perfect that many houses are built without walls.

One such decadent practitioner was Italian fashion designer Marcello Murzilli, who arrived on the Costa Alegre in the 1990’s to realize his dream of a whimsical eco-luxury hotel. Built near a unesco-designated wildlife sanctuary, the Fellini-meets-Robinson-Crusoe property was dotted with a few dozen solar-powered palafitos (thatched huts on stilts). It attracted a star-studded clientele including the model Rachel Hunter, who accidentally burned down part of the hotel while there for a Playboy photo shoot in 2004. Hotelito’s new owners, a consortium based in nearby Guadalajara, recently completed a $20 million renovation, amping up the amenities while preserving Murzilli’s endearing vision.

We’re led though Hotelito’s labyrinth of psychedelic gardens, where workers are futilely raking the sand in the wind. Our palafito is poetic until the sun sets and it becomes rapidly apparent that there is no electric light in my room—a holdover from Murzilli’s days, no doubt. Not feeling very surrealist, I panic and collect supplies at the reception area (a battery-operated reading lamp, drinking water, etc.). But soon hundreds of torches and flickering wax candles are lit and the entire property is illuminated with an exotic beauty.

Later that night we join a handful of guests wearing bejeweled caftans and gather in the restaurant, designed in a sophisticated Philippe Starck ranchero style. Like glamorous castaways, we sip margaritas by a grand wooden bar, listening to jazz and gazing out past a string of fuchsia rowboats in the lagoon to the outer bank, where ocean waves crash and a bonfire rages under the stars. 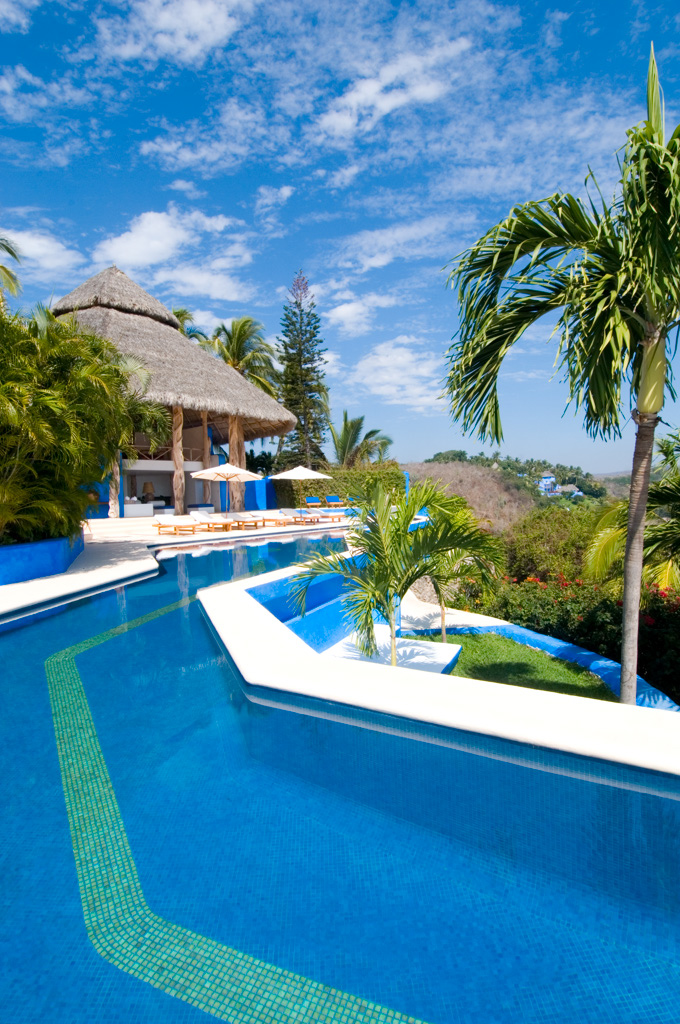 We stop in at Costa Careyes for a few nights and crash a birthday soirée for a playboy-type from Los Angeles. Fairly par for the course around here, where parties tend to erupt over rounds of margaritas and all are invited—now that’s my idea of utopia. Brignone is there, still wearing his signature djellaba, holding a driftwood walking stick at his shaded table at the Mediterranean restaurant Playa Rosa, on Careyes’s main beach. Brignone’s commitment to the bohemian good life is evident in the surrounding architecture: meditation platforms, electric gondolas, a human nest, orange and hot pink castles set on the tropical hillsides. Perceptions warp—in the best of ways—and soon guests find themselves skinny-dipping or watching the sunrise in La Copa del Sol, Brignone’s Niemeyeresque giant cement cup on a cliff overlooking the Pacific that catches the sun at certain times of the year. Brignone’s architect daughter, Emanuela Brignone Cattaneo, is on the same frequency and has recently designed several new villas, called the Constellations—my favorite being a rainbow-painted rectangular tower.

After a few nights at Costa Careyes we head back up the coast and check in to Las Alamandas, in desperate need of a vacation from our vacation. The boutique ranch-style hacienda is owned by Isabel Goldsmith—James Goldsmith’s eldest daughter—and, despite the requisite unmarked entry gate, is not so much surrealist as just luxurious. (Ms. Goldsmith inherited the choice 1,500-acre parcel from her grandfather Antenor Patiño, son of the Bolivian Tin King Simón Patiño.) A mix of Palm Beach, Beverly Hills, and Gstaad, Las Alamandas has few signs, few rules, and perfect old-money service. There are 16 rooms, three new villas, and there is a tarmac to accommodate private jets; I felt more like Ms. Goldsmith’s esteemed houseguest than a paying customer. I wandered through the grand parlors furnished in Spanish antiques, catnapped on the palm-shaded daybeds covered in plush pink terry cloth, and roamed from wild beach to wild beach. At Las Alamandas guests are not advised on how to relax—they already know.

Puerto Vallarta, with its trinket shops, crowded bars along the malecón, and concrete sprawl of condos and shopping malls, is a city many try to avoid, but one that I’m interested in checking out. In the last few years arty types and a growing gay community have rediscovered the old quarter, once the center of the 1960’s tourist boom, where Hollywood stars such as Richard Burton and Elizabeth Taylor owned homes; the new arrivals are renovating the Spanish-colonial villas and opening restaurants and guesthouses. The coolest area is up in the hills, behind the city, with narrow cobblestoned streets lined with dilapidated mansions built by 18th-century port masters and ship captains. That is the location of our next stop, Hacienda San Angel, a series of conjoined villas, including the one Burton purchased as a Valentine’s Day gift for his wife Susan Hunt, later bought by Janice Chatterton, an American who opened the Hacienda in 2003. An obsessive collector, Chatterton has filled every crevice of the guest suites, leafy courtyards, and open-air chapel with Oriental rugs, antique Spanish carved beds, Catholic altars, and statues of saints. It reminds me of a cleaned-up, smaller cousin of the Chateau Marmont.

A staff member, an American with a gentlemanly Southern accent, hands us welcome margaritas as we sit in the lobby admiring a Oaxacan poncho that he tells us once belonged to Yul Brynner. We can hear the romantic roar of a mariachi band, so we make our way to the rooftop restaurant, which overlooks stained terra-cotta roofs and Banderas Bay. Diners fill the tables as neatly coiffed, uniformed waiters zoom around delivering heaping trays of chiles poblano and cabrería. After a few more rounds of drinks we realize that, if it’s raucous fun we seek, we should stay put.

Instead, we’re headed to Punta de Mita, about a half-hour’s drive north, which has emerged as Vallarta’s luxury suburb, where its manicured resorts are tucked into sandy coves close to some of the best surf breaks around. Imanta—which translates loosely as “magnetic attraction”—is a new property with an over-the-top, pre-Hispanic, lost-civilization theme that even the surrealists would have had a hard time dreaming up. It’s as if an ancient Mayan temple had been airlifted to the middle of a hillside jungle with a private beach, carved totems, and daybeds with gauzy white canopies. Guests don’t stay in rooms—they stay in freestanding, minimalist houses built out of giant boulders quarried on site. Big enough for a family of five—but with only one giant bed—each features a bathtub carved out of rock. All signs of the modern world, including electrical outlets and plasma TV’s, are cleverly concealed.

For dinner we cruise to Sayulita, a bustling surf town a few minutes away, with smoothie stands, taquerias, and lots of young, tanned hippies looking for a party. We meet my friend Nathalie Mignot, part of the French-born clan famous for its black pearl necklaces, at Pachamama, the boutique she runs with her family. They also own an art gallery and a hotel, Petit Hotel Hafa, as well as a villa, Les Oiseaux Volants. We wander the wide streets past small candlelit restaurants and bars powered by generators and quirky design concepts. We choose one with swings affixed to tree branches instead of chairs. The Italian chef, a surfer by day, cooks homemade pasta on a small camp stove. His Spanish wife doubles as our waitress. It’s a challenge to eat seafood linguine in white wine sauce while sitting on a wobbly swing, but I applaud their effort to subvert the conventional dining experience. I’m pretty sure André Breton would have approved, too.