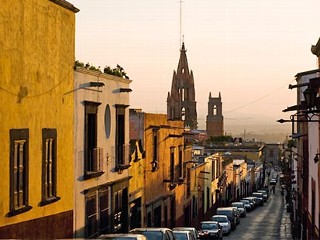 The bells of the majestic pink granite 17th century cathedral peal through the streets. People sit in outdoor cafes lining the cobblestone streets of the main square contemplating a scene worthy of a romance film set in Italy.

But this isn’t Europe; it’s the colonial city of San Miguel de Allende, Mexico, just hours from the Texas border. And many of those people sipping coffee in the cafes are Americans who now call San Miguel home.

American expatriates have been settling in San Miguel for half a century. Drawn here by the colonial charm, the dry mountain that never gets too cold or too hot, the proximity to the U.S. and by the low cost of living.

“You’d be amazed at what you could get for 80 pesos [US $6],” said Tim Johnson, a former New Yorker who has been living here with his partner for almost four years. “You get your oranges for half of the week and all kinds of fresh vegetables.”

“Cost of living” is a constant refrain. As millions of baby boomers face retirement in an economy that has ravaged their savings, places like San Miguel have an extra appeal.

The Seduction of San Miguel

Ralston and Kendrick moved to San Miguel from Texas because they wanted their young sons to be fluent in Spanish and to expose them to another culture. In the U.S., top private schools can reach up to $28,000 a year. In San Miguel, the bilingual private school the boys attend costs $2,000 a year, and Ralston and Kendrick are convinced their sons are getting a good education.Retired high school teacher Gay Raferty and software engineer Ira Crowe came to San Miguel for a month to escape the winter cold back in Gloucester, Mass. They’re thinking it is a town they could live in and a home they could be happy in. They didn’t come looking to buy.

Threatened by Rise in Popularity?

“I’m concerned about the influx of lots of people” said Jack Watson, President Jimmy Carter’s former chief of staff, and current San Miguel resident. “Because one of the special things about this place is the nature of [it], so that if it is overwhelmed by people coming from the United States or from wherever else, you’ve got lots of problems.”

Robin Arena from Fort Worth, Texas, said she was drawn in by the food. “My favorite thing is it’s so inexpensive,” she said. “I remember the first time I went to the market to buy cilantro, [it cost] 20 cents … I kept thinking I need to add another zero. It is unbelievable.”

To be sure, it’s more than the cost of living that makes San Miguel so appealing, making the city a budget-friendly alternative to more traditional warm weather and retirement destinations, like Florida.

San Miguel overflows with restaurants, art galleries and cultural events, and the spectacular Spanish Colonial city center is a UNESCO World Heritage Site. That, combined with its affordability, helps explain why more than 10 percent of the city’s 80,000 full-time residents are Americans and Canadians.

Writer Jeanne Ralston and photographer Robb Kendrick moved to San Miguel with their two boys. Life for them is exotic and very comfortable. And the savings are staggering.

“Once you buy a house here, property taxes on a nice house could be $200 to $400 a year,” said Kendrick. “You don’t need homeowner’s insurance here because they don’t believe in lawsuits like what happens in the states. We don’t have homeowner’s insurance because the houses are stone and stucco, and so they’re not going to burn very easily, and so you don’t have that cost.” The family has a housekeeper who cooks and cleans five days a week for $80. The gardener comes three days a week for $30.

The family initially planned to stay for a year; they’ve loved it so much that they’ve been in San Miguel for three. But as the boys approach high school, they are thinking of returning to the U.S., so they’ve put their house up for sale.

“That was not in our mind at all,” said Raferty. “It seems, everybody we’ve spoken to, has just fallen in love with this beautiful city.”

They’re looking at buying Ralston and Kendrick’s three-bedroom house, including guest cottage, outdoor dining area and large gardens. It is listed for sale for $645,000. That’s not necessarily cheap, but even in today’s real estate market, the same spread in a prime location in Florida could cost upwards

As more and more Americans and Canadians are drawn to San Miguel, you can see the growth.

On the edge of town, condos are for sale for $250,000. Outside, Florida-style golf resorts are springing up, and homes start at less than $200,000. And there are dozens of restaurants and cafes, even a Starbucks. There are also the familiar big box retailers Home Depot and Wal-Mart, just a short drive away. The once-remote area in Central Mexico appears on the cusp of a population explosion.

But for now, the town is thriving, which is why Ralston and Kendrick are having a tough time deciding whether to move back to the U.S. They’re not sure they want to sell their house in San Miguel.

“We’re looking at moving back, and in the past nine months, we’ve driven probably 7,000 miles, we looked at 10 different cities, everything from Asheville, Ore., to Nashville and we haven’t seen a place,” said Kendrick.

“I think San Miguel has almost ruined us for other cities,” said Ralston. “We’ve been all across the U.S. now looking for the next place we’re going to move and, you know, San Miguel has so much, it has everything in one place.

You’ve heard of Mexicans clamoring to live in the U.S., but here, it’s the opposite: Americans migrating south of the border.