SAYULITA, Mexico — For some residents of this formerly secret surfers’ haven on the Pacific coast, the sure sign of gentrification came in December with the opening of the town’s first wine bar. Others cite the $18,000 life-size wooden horse displayed at a swank home décor shop north of town as evidence of the area’s seismic demographic shift. Still others point down the beach toward gated Punta Mita, where new villas start at $4 million.

Could celebrity sightings be far away?

“There’s one behind you now,” says Richard Zarkin, whose job is to market the image of what may well be Mexico’s Next Great Place. He motions to a hunky guy at the next table hunched over a laptop and a bowl of oatmeal.

Indeed, it’s grooming guru Kyan Douglas, one of the stars of the former Bravo TV reality show Queer Eye for the Straight Guy and a new Sayulita homeowner. So what if he lacks the stature of, say, a Richard Burton, whose presence (along with Elizabeth Taylor, director John Huston and a cadre of other Hollywood greats) helped propel nearby Puerto Vallarta to fabulous status back in the 1960s? The horde of developers, hoteliers and marketers flocking in recent years to this 100-mile stretch now known as the Riviera Nayarit are seeing to it that the word gets out. 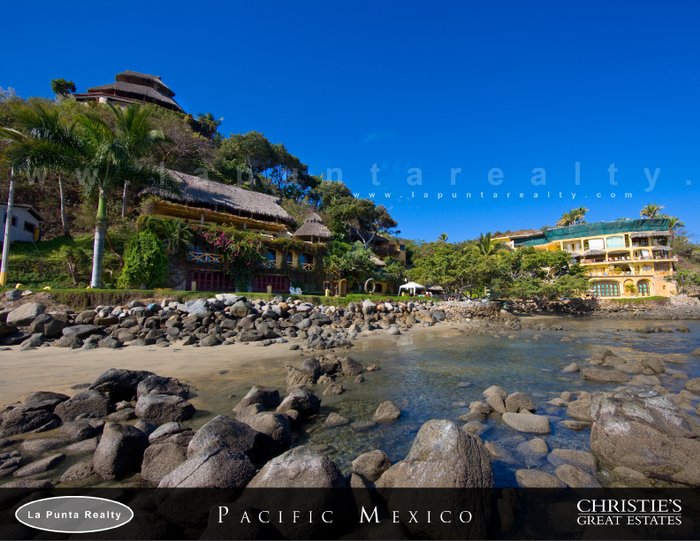 The beaches here range from secluded rocky coves to wide, palm-fringed expanses. The sea shimmers a dazzling Caribbean blue on some stretches, thanks to an abundance of coral reefs. And thick jungle foliage cloaks the slopes of the Sierra Madres that tumble toward the shore.

The character of the 20 or so Riviera Nayarit locales varies from bustling to sleepy. The coast begins atNuevo Vallarta, chockablock with big, all-inclusive resorts 15 minutes north of the Puerto Vallarta airport, and ends at San Blas, whose largest hotel has only 50 rooms. In between lies everything from new ultra-exclusive gated enclaves such as Punta Mita; the ’70s-vintage mass-market resort town of Rincón de Guayabitos; pristine beaches that draw campers, such as Chacala; and fishing villages with growing ex-pat populations, such as Sayulita and San Francisco.

In the past two years, the Mexican government has infused the coast with $1.5 billion in infrastructure, primarily at the southern end on the Bay of Banderas. But the region took a promotional leap forward last year when Mexican tourist officials tacked “Riviera” to the state name of Nayarit. Within three months of the March 2007 announcement, more investment money poured into the state than in all of 2006. When land in one government-planned resort went on the block, it sold out in only 20 days.

Meanwhile, in various places along the coast, villages whose commerce once revolved around taco stands and auto repair shops have sprouted organic cafes, yoga studios — and hotels for well-heeled travelers who demand such amenities. Nineteen lodgings with more than 4,000 rooms are slated to open by 2011. One major development, Litibú, will house seven upscale resorts and boutique hotels, and a Greg Norman golf course is due to open there this fall. Farther south at La Cruz de Huanacaxtle, a new marina accommodating yachts of up to 400 feet opened in December, with more surrounding hotels, shops and housing to come in the next two years.

This sort of cushy exclusivity is drawing Hollywood glitterati — Jennifer Aniston, Will Smith and John Travolta have checked into private villas. And Britney Spears, Robert De Niro and Elton John are among past celebrity sightings at the Four Seasons Punta Mita.

In fact, the Four Seasons, where high-season rates start at $590 a night and the poolside cabanas rent for $250 a day, sparked the luxury development boom when it opened in 1999 on 1,500 acres of manicured perfection. Now, private villas in the gated resort community are priced at up to $6 million. A second Jack Nicklaus golf course opens this fall, as does a 120-room St. Regis hotel next door. Also at Punta Mita, a super-exclusive adults-only suites hotel opens in 2010, and the Enchantment Group just announced it will open a 30-room destination spa the same year.

A second government-planned tourist development with an airport is destined farther north at El Capomo. And just south of there at Punta Raza, private developers have started work on a project that will yield eight hotels, including a Grand Hyatt and Park Hyatt, 950 homes and a golf course.

Up and down the coast, hand-lettered for-sale signs promising privacy and views peek through the jungle foliage. In some towns, real estate sales offices masquerading as “cultural centers” lure unsuspecting visitors.

Clearly, the land rush is in full swing. And while that may annoy some, some newcomers are taking the rapidly changing landscape in stride.

“The selfish part of me wants to keep this place a secret,” says Douglas, finishing his breakfast at Choco Banana, a popular eatery in the heart of Sayulita. The Queer Eye star discovered the fishing village — not so long ago an off-the-beaten-path surfing spot — in October, when he sneaked out of a nearby yoga retreat to get an iced mocha in town. “But the reality is, everything changes.”

Ian Hodge, an early ex-pat resident who first came here to surf in 1999, isn’t bemoaning the changes either, given creature comforts such as high-speed Internet and steady water pressure he now enjoys in his jungle home. Hodge dates the beginning of the boom to 2004, when more Americans began building houses. That, in turn, spurred the opening of more restaurants and more hotels.

“When we moved here, we never dreamed this would happen,” says the former Bend, Ore., resident. “But I think Sayulita is better than ever. You can get a non-fat latte and good wine and good cheese and better vegetables than you’ll find in (Puerto) Vallarta. But it’s not a tranquil little fishing village anymore. It’s a thriving Mexican village that thrives because of visitors.”

Just north of Sayulita, little San Francisco (popularly known as San Pancho) seems staid in contrast to the surf town’s boisterous eclecticism. Sidewalk taco stands outnumber full-service restaurants. The wide, white beach is laid back by day, and the cobbled main drag is deserted by early evening. The town has an artistic bend, with an annual music festival and a 40-member artists’ collective. Vacation villas are perched on the hillsides around a town that has long boasted more amenities than similar villages, thanks, in part, to former Mexican president Luis Echeverria, who had a vacation home here.

Longtime San Francisco resident Mayte Cisneros relies on tourism as part owner of Bungalows Lydia, a former family retreat set on a spectacular oceanfront bluff overlooking an arc of secluded beach. But even good times like these can be disconcerting.

“People say, ‘You are the only Mexicans here.’ Yes, it seems like we are, and we’re not leaving,” she declares.

At the Riviera Nayarit’s northern reaches in San Blas, there’s less evidence of a tourist boom, though a new marina is under construction. The area attracts bird-watchers from November to March. History buffs come to see the home of 18th-century mission founder Junipero Serra. And in summer, novice surfers flock to its shallow 2-mile long beach. But the swarms of jejenes (hay-HAY-nays, or biting gnats) and mosquitoes, which breed in the thick mangroves there, have thus far outwitted tourism developers.

Betty Vasquez, a Cordon Bleu-trained chef who runs the restaurant at her family’s Hotel Garza Canela, doesn’t mind. “We respect the environment here,” she says. “This is still a quiet town. We still know each other. We don’t want an onslaught of tourism.”

Neither does Juan Bernal. But like it or not, it’s coming.

The 23-year-old and his parents operate Rincón del Cielo, a small hotel on one of the prettiest beaches in Mexico. It’s a basic (no electricity) eight-room operation facing a 1½-mile arc of sand leading to an estuary.

Bernal motions to a road cutting through the coconut palms to where work on the eight-hotel Punta Raza development is beginning.

“They’ve blocked access. They want to put up a wall for protection,” he says with a laugh.

But when it’s suggested that the new commerce might be good for his own family’s enterprise, he interrupts, saying, “We like things they way they are now.”