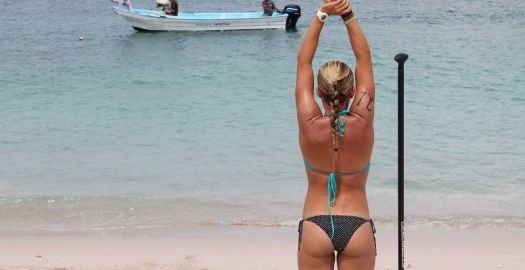 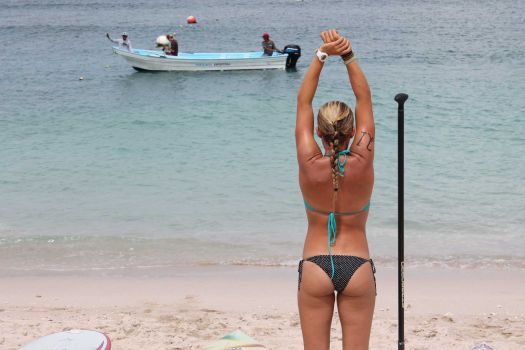 Like kids at summer camp, adults can play all day at the posh St. Regis resort in Punta Mita on Mexico’s Riviera Nayarit

As the car pulled up to the St. Regis Punta Mita, I felt apprehensive and excited, like a kid getting dropped off at summer camp.

I was heading to the Mexico luxury resort for the inaugural Punta Mita Beach Festival, billed as an “adventurous experience” featuring stand-up paddleboard clinics, surfing lessons, yoga on the beach, biking, snorkeling and paddleboard races. In fact, it sounded a lot like adult summer camp. For four days, we could learn new skills, make new friends, play all day and show up at the mess hall just in time for dinner. In our case, the mess hall was a beautifully set table on the beach in paradise.

The festival was the brainstorm of resort general manager Carl Emberson, who was looking for a “creative, interactive experience” to show off the resort’s beautiful beachfront location. The event launched with a cocktail party around the beachside infinity pool. It was easy to get into the vibe with dapper Australian mixologist Oliver Atkins shaking up watermelon martinis. Spirits experts offered artisan Mezcal tastings or shots of Mexican whiskey, while waiters passed botanas, or little bites. Celebrity chef Diane Dimeo planned a barbecue on the beach, complete with roasted pig.

Before long, I was meeting other guests – a couple from Austin celebrating their 10th anniversary; a magazine editor; an artist/cultural anthropologist from Oaxaca and her daughter, a chemist from California; and a couple from Arizona who had brought their two kids.

With my newfound friends, my trepidation about traveling alone in Mexico eased. Not that there is much to worry about in Punta Mita. It’s an upscale, gated community of luxury resorts, villas, golf courses, restaurants and pristine beaches in the Riviera Nayarit, just 12 miles from Puerto Vallarta.

The first morning, we rose early for Hatha yoga. The resort’s instructor, Melanie Voyer is the kind of teacher who can guide you through the moves in a way that feels like more than exercise. Her beautiful voice and manner soothe the soul. The yoga on paddleboard sessions tested our balance even more. 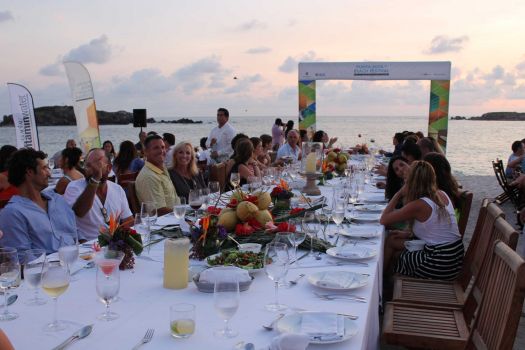 We paddled out toward the islets, stood up on our boards and got comfortable paddling around the calm water. Piece of cake. Then we moved to the breaking waves. Catching a wave on a paddleboard is harder than it looks. But once you ride a long, slow wave into shore, you’re hooked. If it knocks you off, you scramble back on to try to catch the next one.

As soon as the clinic was over, the 5K race began. Adults and teens competed, paddling out and around several buoys and then back. Shelby Taylor, a tanned, fit 21-year-old from Kentucky took the honors. Taylor came to Sayulita with her parents, and never went back.

For the seasoned surfers, Alvarez had planned an excursion by boat to a special spot the following day. “Mexico has huge potential for surfing,” Alvarez said. “Hawaiians come here in the summer.” A tropical storm brewing in the Pacific thwarted those plans, though.

While the storm also forced the cancellation of the snorkeling trip to Las Marietas National Park, it gave us the chance to explore the area. The resort offers bikes to tool around Punta Mita. Guests also have access to two Jack Nicklaus Signature Golf Courses with amazing views.

But we opted to head out of Punta Mita to Sayulita. What once was a sleepy surfing village has become a shopping and dining hot spot. Fighting for a parking spot in this bustling town was a wake-up call after the relaxed vibe of the five-Diamond resort. The stores, painted in bright colors, offered carvings, pottery, embroidered bags and jewelry. Artisans worked their crafts at the sidewalk market. On the beach, we met American ex-pats who run a surfboard rental stand. Vendors wanted to sell us everything from textiles to jewelry to juices. We ducked into Don Pedro’s Restaurant & Bar to get out of the rain and were happy the rest of the afternoon with our ceviche and margaritas.

After that drizzly but beautiful afternoon, we headed back to the resort for an elegant dinner on the beach. The St. Regis set a table for 60 along the water’s edge. We ate great food, watched the sunset and got to know our fellow campers. All that was missing was the s’mores. But Emberson had thought of that, too, and had a bonfire built on the beach. Grown-ups and kids roasted marshmallows – those with the golden brown puffs got bragging rights, as usual.

Then we lighted Chinese flying lanterns and sent them sailing into the air with wishes for another trip like this one, no doubt. We parted after brunch the next morning, sharing cars to the Puerto Vallarta airport and promising to friend each other on Facebook.

For Migrants, New Land of Opportunity Is Mexico