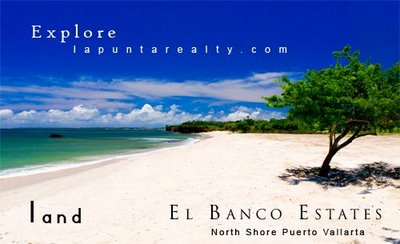 The coveted coastline of Mexico, now available for foreign investment, is experiencing a luxury development boom.

The well kept secrets of Pacific Mexico’s dramatic cliffs, coves and sand have long attracted the Blue blooded and Hollywood set looking for a quiet escape. Since opening up to foreign investment, Mexico has seen an explosion in luxury residential resort development.

According to the Mexican government, foreign investment in Mexico is on track to hit $20 billion this year, up from $17.6 billion in 2005.

Mexico also is drawing more attention from Europe. Last year, Spanish companies were the top investors in the tourist industry, pumping $416 million into resort properties. U.S. investors followed with $321 million, according to the tourism agency.

Mexican President Vicente Fox recently inaugurated the Nayarit Tourist Corridor, a coastal infrastructure mega-project north of Puerto Vallarta. This plan is financed by state, federal and private interests. It is part of a plan proposed in the early ’90s for appropriate sustainable development of the region.

The government hopes to keep the infrastructure growing to accommodate the increasing number of new homeowners. Services like electricity, water treatment, telecommunications, airports and highways are completed by a major hospital, schools, commercial centers, an aerodrome, a 150 slip marina and a marine park similar to that of Xcaret (http://www.xcaret.com/). The idea is to dot the coastline with smaller, tasteful establishments, in the luxury boutique market.

The Mexican government has also changed some of the real estate laws. Now it is easier for foreigners to buy and develop property in Mexico. Many Americans have watched the values of their Mexican properties appreciate 10% a year the past five years.

The development of North Shore Puerto Vallarta, Punta de Mita and the Nayarit coast is a special phenomenon for Mexico. Low density developments preserve the environment and create a balance that is essential for the high end coastal lifestyle that people dream about. It is truly amazing what is happening. There are many active developments to choose from along the North coast and the properties are selling well.

The most exclusive luxury investments are taking place in the areas around Punta de Mita. ( http://puntamita-realestate.com/) The real estate has a restricted occupancy rate. It can be as little as nine bedrooms per 2.5 acres. This keeps the number of landowners down and encourages development of high-end living. La Punta Realty, for example, offers private beachfront home site lots priced from $600,000 – $7 million USD. Unique and luxurious beach villas range from 2 to 20 million USD.

Adjacent to Punta Mita, other luxury hotel groups like the Ritz, Banyan Tree, The Omni, Hilton, One and Only Resorts and other hope to compete with similar offerings.

La Punta Realty has the most complete and intimate knowledge of the diverse and expansive coastline of Nayarit and Jalisco. Please visit our booth to ask about the Mexico Land Catalog of beaches and coves best suited for residential, hotel resort, or home site lots.. ( http://www.mexicolandcatalog.com)

The Future of Banderas Bay and beyond…

Mexico’s push to stimulate tourism and attract private investors began to take shape in 1974 with the creation of the National Trust Fund for Tourism Development (Fonatur). Since its inception, Fonatur has been responsible for planning and developing five seaside destinations — Cancun, Los Cabos, Ixtapa, Loreto and Huatulco — that generate about 54% of Mexico’s foreign tourism spending.

The goal now is to elevate the quality and quantity of the tourism product while diversifying the product in an effort to attract even more investment. At the same time, tourism officials want to focus on attracting sustainable development with rigorous environmental safeguards.

The Bay of Banderas has grown naturally, organically, privately, and currently attracts over 3-million tourists per year and has a population of about 325,000. According to FONATUR, (http://www.fonatur.gob.mx/) the Mexican tourist development bank, and the Banderas tourism board, the number of tourists in the next 20 years will exceed 6 million per year and the population will more than double.

The market has just become prolific in Mexico, with about 1.5 million Americans now owning property there. Values in some markets have tripled in five years — far exceeding the rates of return you find in the United States.

The Bay of Banderas serves as the foreground for lush, tropical jungle, while the rugged Sierra Madre mountain range provides the backdrop. This is the vista that planners want to preserve. Luxury home buyers are gravitating toward ecologically sound and conservation-friendly communities in the North of the bay, only a short distance away from the sophisticated dining, galleries, shopping, and night life of Puerto Vallarta.

In the South is a condominium explosion, primarily in Nuevo Vallarta, Marina Vallarta and along the hillsides of the Sierra Madres overlooking the town and the bay.

Earning its reputation as a premier golfers’ destination with Travel and Leisure honoring Punta Mita as third best golf resort in Mexico and Latin America. The area has seven spectacular golf courses, designed by some of the world’s top architects, including Jack Nicklaus, Greg Norman and Tom Weiskopf. Planned are 7 more golf courses around Puerto Vallarta Punta de Mita alone.