WHEN Joanie Cartal and Ian Purse first visited Sayulita, Mexico, six years ago, it was still a basic torpid fishing village on the Pacific Ocean, the kind of place favored by vagabond surfers and scrawny mutts. They were so taken with the place, which was just being discovered by tourists, that a year later they bought three lots a block from the town’s palm-shaded plaza — totaling about a sixth of an acre for $103,000.

About falling for Sayulita, Ms. Cartal, who owns a restaurant in Palo Alto, Calif., simply said: “It kind of just happened. The flavor, the color — there’s just something special about it.”

Villa Amor – Overlooking all of Sayulita

This year, Ms. Cartal and Mr. Purse, who is a holistic healer, finished building a six-room, 4,000-square-foot hacienda that has ocean views. It cost about $110,000 to build, and they plan to spend at least part of each winter there.

In the last six years, Sayulita, surrounded by the fertile foothills of the Sierra Madre, has awakened significantly, and land isn’t so inexpensive anymore. Ms. Cartal and Mr. Purse estimate that their land and house are now worth from $400,000 to $500,000.

But cost hasn’t stopped more and more Americans and Canadians from making Sayulita their second home, whether for a few weekends or for half the year. They are drawn by its beginner-friendly waves, a strong sense of community among Mexicans and transplants, and the shreds of Old Mexico that still remain.

“It’s gotten to the point where I don’t know half the people here,” said Harvey Craig, a real estate agent who moved from British Columbia to Sayulita 12 years ago to set up shop.

The people who typically populate the leafy plaza are as varied as the wrack that the Pacific storms drive onto the beach: dreadlocked nomads, retirees in calf-high gym socks, semi-nude surfers and the occasional caballero — buffed belt buckle shiny — from one of the nearby cattle ranches.

“There’s a certain degree of strangeness among people here,” Mr. Purse said. “They tend to be more maverick.”

Cobbled roads radiate from the plaza and are pimpled with taco stands, fruit vendors, art galleries, surf shops — and a growing number of real estate offices. The town ends at the sea, where rocky peninsulas frame a mile-long arc of sandy beach. Just offshore the consistent reef break that first drew surfers to Sayulita is regularly crowded with kids on shortboards, aging long boarders in knee braces and beginners taking lessons on foam boards.

While quick growth has changed Sayulita, there is still a bit of Old Mexico. Before services, acolytes tug on the worn blue-and-white rope of the church bell to summon people to Mass.

There are still beach campgrounds where surfers pitch tents and hang hammocks for the season. During the annual Sayulita Days festival in February, caballeros in white cowboy hats dance their horses up and down the streets, while horn bands play the raucous music known as ranchera late into the night. And if you live in town, there’s no need for an alarm clock. The roosters there still rise and crow with the sun.

“We realized this had all the charm and climate and magic we wanted,” said Carol Craig, an art teacher from Thunder Bay, Ontario, who last year, with her husband, Terry Trusdale, bought a two-bedroom house with pool and tropical garden outside town.

People like Ms. Craig say they have been drawn to Sayulita because they want to immerse themselves in the local community and culture more than someone who buys a condo in a gated community in nearby Nuevo Vallarta.

“I want to be in a place where I can know the local people.” she said. “Where there aren’t 12-story high-rises.”

Amy and John Cawrse of Bend, Ore., agree. That was a big reason why they paid $70,000 five years ago for the 8,000-square-foot lot on which they built a two-bedroom house. The couple first visited 10 years ago, so Mr. Cawrse could surf the two breaks. “We fell in love with it then and kept coming back,” Ms. Cawrse said.

The town’s growth has certainly created big changes, but some are more subtle: dirt streets are now rare, for example, and last year the town went from being an A.T.M.-free zone to having three. Cellphone service is good, though Sayulita is small enough that you can generally run into the person you’re looking for, usually drinking coffee at the Choco Banana cafe.

Expatriates and second-home owners have also donated tens of thousands of dollars to improve the infrastructure, from a pedestrian bridge over the river to better trash pickup.

Most residents cite the temperate climate — comparable to Hawaii’s — as one of Sayulita’s greatest assets. And American-style department stores and first-run English-language films are a short drive away in Puerto Vallarta, where there is an international airport.

On busy weekends, space on the beach can be scarce. And Mexican law prevents direct foreign ownership along the coast and its international borders. So foreigners have to buy property through a trust. Lots are small in town, where many choose to build to be close to the beach and services, though more acreage is available in surrounding areas.

Sayulita’s relative isolation ended with the completion of a highway from Puerto Vallarta 10 years ago. Though the town may once have been a bargain, those days are gone. Prices range from $100,000 for fixer-uppers to millions of dollars for oceanfront estates.

The Mexican government is promoting the local coast as the Riviera Nayarit (it’s named for the Mexican state that Sayulita is in), with condo towers and golf-centered developments being built to the north and south of the town, which, so far, is free of such development. But a company from Guadalajara has proposed a 35-unit project at the north end of town.

Because of the lack of look-alike developments, housing stock varies, ranging from the casas to glass-and-angles contemporaries. And there is no shortage of outdoor living spaces and multicolored tile. There are about 600 foreign-owned properties in town, Mr. Burten said, and most of them are rented to tourists throughout the year.

Statistics are difficult to come by, but most local real estate agents agree that homes have been appreciating from 10 to 25 percent annually in the last five years. As they have north of the border, though, appreciation rates have slowed and prices have moderated this year.

Even so, lots are scarce and are all but nonexistent in town. “I could have bought the whole hill for a half million dollars,” Mr. Craig said. “Now you can’t buy a lot up there for half a million.” 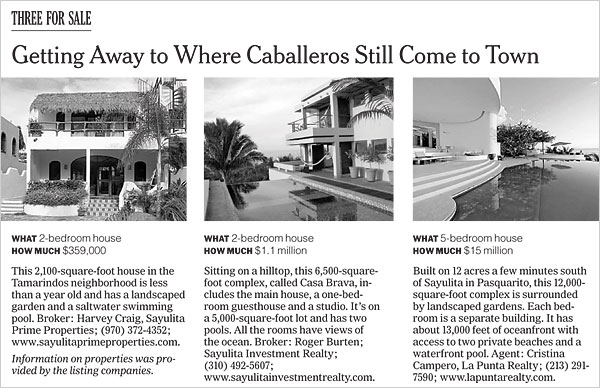 LAY OF THE LAND

POPULATION About 2,500, according to the nonprofit Grupo Pro Sayulita.

SIZE The town runs roughly a mile along the Pacific Coast, but just a few blocks inland.

WHERE About an hour drive north of Puerto Vallarta.

Rental homes are the best bet for staying in town; a list of available homes is at LPR Luxury Rentals