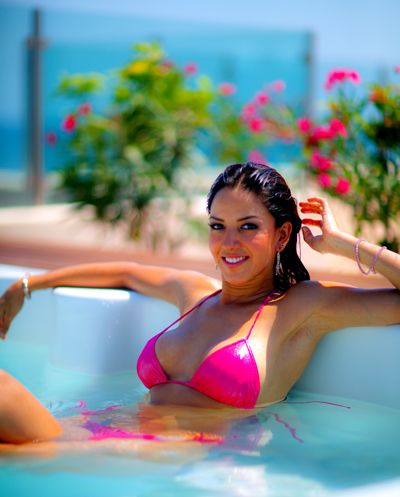 The three guests of honor were, Karen Manzano, a beautiful girl, model, dj and a host of Playboy Mexico TV is a Mexican ambassador to the major international magazine.

Shining and charismatic, she won the hearts of all who met her during the weekend events.

The singer Toño Muñiz was accompanied by his sister, the ever friendly and positive Beba Muñiz.

His brothers of the group Coque Muñiz, were presenting a new album and could not attend.

Another one of the reknowned guests was Chao, an 80’s romantic ballads singer, began his successful career at a very young age, stays in good shape and recently participated in the show “Solo Para Mujeres” (just for Women) with Sergio Mayer.

Chao also enjoyed the party and the presentation of Cartier in the company of his wife.

La Punta Realty photogs took on the chore of paparazzi, spent time with the wizards in the kitchen and ended the weekend with a rooftop photo session at Cinco Hotel at Punta de Mita, a pearl of the Riviera Nayarit.

Thierry is extremely visual. In his dishes, the miracles he creates in the kitchen are converted into compositions that communicate through our senses, using a precise synthesis of colors, flavors, proper lighting and distribution. This gift of intuitive ability to perceive the right harmony of sensual elements is what turns the experience of dining at Café des Artistes into a sensual work of art.

Thierry was born in Puerto Rico in 1964, the son of French parents. His grandfather, Max Blouet, was General Manager of the prestigious Hôtel George V in Paris for over 30 years. Educated in France and Mexico, he began his career in 1983 at the Camino Real Hotel in Ixtapa, then at the Camino Real in Mexico City -at the prestigious “Le Fouquet’s de Paris”- where he was named Chef de Partie. He worked during a few seasons at prestigious restaurants and hotels such as “L’Amandier” and “Le Moulin” of Chef Roger Verger near Cannes, France and the “Ritz Carlton” in Chicago among others. In 1987, he came to Puerto Vallarta as Executive Chef at “La Perla”, of the same company. He founded Café des Artistes in December of 1990 with two partners and in 1994, he became its sole owner.

In February 2000, Thierry was admitted to the inner circle of the most prestigious chefs of the world, the “Maîtres Cuisiniers de France”. Only 340 French chefs hold that title today, it is the highest qualification there is in the world of gastronomy. Their commitment is to be ambassadors of French gastronomy throughout the world, promoting its apprenticeship and continuous striving for perfection.

He is also a member of the “Académie Culinaire de France”, an organization that brings together French chefs with those of other countries such as Mexico, Canada and the United States. Its goal is to bring together those chefs who wish to share and enrich themselves with the cooking techniques, knowledge and practice combined with respect for tradition and controlled modernism.