I arrived in the eerie Mexican town of Mineral de Pozos in the middle of a half-sunny afternoon, with shadows creeping all over the adobe…

I arrived in the eerie Mexican town of Mineral de Pozos in the middle of a half-sunny afternoon, with shadows creeping all over the adobe buildings, the cactus thickets and the almost empty cobblestone streets.

I’d hired a cab for the 50-mile trip from Santiago de Queretaro to this mountain town in the central highlands of Mexico. Waving goodbye to the cabbie, I turned to face a dusty and forsaken scene.

Bleached skulls hung atop old poles. The hands on the clock that towered over the main plaza were frozen. At an abandoned chapel that now serves as a goat pen, 4-foot cactuses rose from the eaves. I could have fired a cannon in that main plaza and hit nobody, although it might have disturbed a sleeping dog or two.

The Mexicans call their ghost towns “pueblos fantasmas,” and Mineral de Pozos — about 185 miles northwest of Mexico City and 40 miles northeast of San Miguel de Allende in Guanajuato state — is one of them, a relic from the great Mexican mining boom of the late 19th century.

But Pozos, up at 7,500 feet, isn’t dead. It’s slowly growing, its ghosts joined by perhaps 3,500 residents who have begun filling the reclaimed buildings with contemporary art and pre-Hispanic music. The town has three hotels, eight to 10 art galleries (depending on how you count them) and perhaps 50 Americans, many of them artists, who live here at least part time. 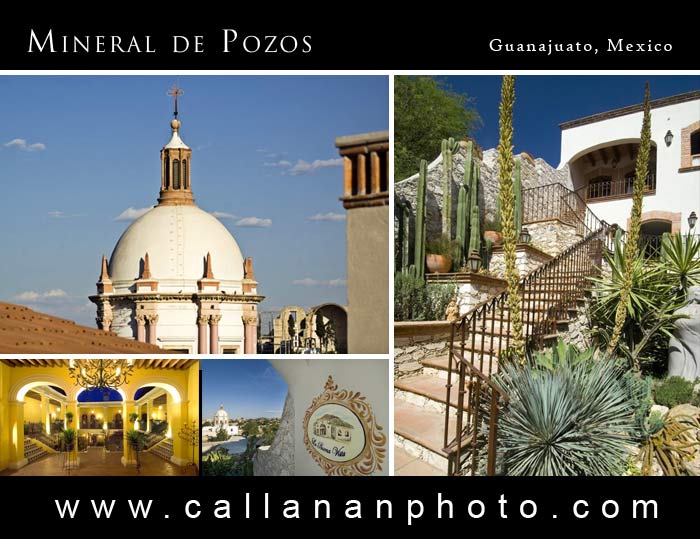 Pozos was born in 1576 as a mining town and grew in fits and starts alongside half a dozen other boomtowns in the high, rugged central region that Mexicans call the Bajio. By the last years of the 19th century, the number of working mines had reached 300 and the population in Pozos alone had reached 70,000.

But then came the Mexican Revolution of 1910. Mines began closing down, and many flooded. Silver prices fell. And it didn’t help that many Pozos residents were militant Catholics at a time when the Mexican government was dominated by anti-Catholic forces. Pozos was doomed.

By the 1950s, some say, the town had shriveled to about 200. But signs of life have come in recent years.

I found my hotel, the Casa Montana, asked about a guide and soon was shaking hands with Marco Antonio Sanchez, whose family history tells the story of Pozos: His grandparents worked in the mines. Sanchez earns his living by making, selling and playing pre-Hispanic musical instruments and occasionally guiding newcomers like me. (We spoke mostly Spanish, but he seemed to understand every word I uttered in English.)

We started our tour in the middle of town, where forsaken structures seem to outnumber occupied buildings about 3-to-2. Out on the edge of town, the ratio is more like 10-to-1. At a rustic crossroads between town and the Santa Brigida mine to the northeast, we stopped to ask a local named Pepe Fernandez about road conditions. “It’s ugly this way,” he said in Spanish, looking up one rugged path. “But it’s uglier this way,” he added, looking up another.

Still, it was only a few miles to the old mine. Before long, we were crouching amid the ruins of an old mining hacienda, the sky spread above where a roof should have been, peering into the black depths of an old well — a “pozo.”

At another mine, the Hacienda de Cinco Senores mine on the west end of town, the buildings arched and sprawled down the hillside.

Some of the old mine sites are owned by individuals, some are owned by “ejido,” or communal organizations, and some are in dispute. Sometimes a modest admission fee is asked, sometimes not.

As for measures to ensure safety or prevent vandalism — there are nearly none. At Santa Brigida and Cinco Senores, the biggest sites, deep shafts are minimally marked. It’s a rotten place for unsupervised kids, an excellent place for hiring a guide.

Most travelers probably wouldn’t choose Pozos as their main destination. But it is just under an hour’s drive from San Miguel de Allende, one of the bigger magnets for culturally inclined tourists in all of Mexico; about an hour from Santiago de Queretaro, which has a fascinating historic center and a convenient airport; and about two hours from Guanajuato, another artsy town that’s rich in history and collegiate energy.

So if you’re a painter, photographer, history geek, architecture dweeb, mineralogy wonk or just a seeker of singular landscapes, this could be the beginning of a larger adventure.

Every May, there’s a mariachi festival; every July, a pre-Hispanic music festival; every September, a celebration of the nopal and maguey plants. (The nopal, also known as prickly pear cactus, is an occasional ingredient in tacos and egg dishes. The maguey, also known as agave, is an indispensable ingredient in tequila.) There are art walks in summer and winter, and one or two home-and-garden tours annually.

As I drifted off to sleep my first night in Pozos, I imagined the whole town as an artifact carried back by an artist to the studio — not a conventionally pretty artifact but an evocative and mysterious one.

And then I wished I had aspirin, because Pozos is about 7,500 feet above sea level and my altitude headache didn’t subside until the next morning, when Sanchez led me through the landmarks of the town’s resurgence.

Of course, Teresa Martinez was on the itinerary. Fifteen years ago, Martinez told me, she had come to town to lock herself up for two years and write a novel. Instead, Martinez (who was born in Monterrey, Mexico, but spent many years studying and working in California and New York) wound up launching herself as an entrepreneur.

By 1995, she had converted a former cigar factory into a five-room hotel/restaurant/gallery. One guest room at her Casa Mexicana, known as the Tower, is arranged as a four-level loft, suitable for a Mexican Rapunzel.

Another chapter in the Pozos story stands next door: the Casa Montana, a hotel/restaurant/gallery that came along in 2000, giving Martinez competition but also reassuring her that, in her words, “I wasn’t crazy.”

But the latest lodging competition in town — and the most formidable — is the Posada de las Minas, opened in 2005 about a block up the hill and designed and run by David and Julie Winslow, of Houston and Pozos.

It’s the largest lodging in Pozos (eight rooms), festooned with folk and contemporary art, with a central courtyard, restaurant and gardens, and interiors as saturated with color as the quiet streets outside are bleached by the sun.

THE BEST WAY TO POZOS

From LAX, connecting service to Querétaro is offered on Continental and Mexicana. Restricted round-trip fares begin at $538.

Taxi rides between Querétaro and Pozos cost about $40.

Casa Montana (above). Breakfast, lunch, dinner. Main dishes up to $9. 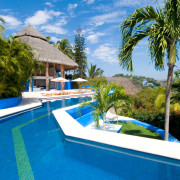 Settling Down South of the Border

Want a luxury vacation? Enjoy the high life for less on Mexico’s Rivi...

Discovering the Grand Traveler in Costa Careyes
Scroll to top