Mexico Tourism Board has today released results of 2011 first quarter tourism activity inMexico.  Across a raft of measures from tour operators, airlines, resorts, cruise lines and attractions the first three months of 2011 has proven to be one of prosperity and growth in both volume and revenue.

Tourism is alive and well across Mexico.  In fact, The Ministry of Tourism recently reported that during the Easter holiday period, hotel occupancy in the inner cities reported a 4.2% increase during the same period as compared to last year.

Locations such as Merida, Leon and Queretaro, all reported significant increases of over 8% across the board.

Additionally, hotel occupancy was up across many tourist destinations including Guanajuato (6.2%), Villahermosa (9.2%), and Aguascalientes (75.1%) to name a few.  These results are a testament that tourism is growing in Mexicoand thereby creating thousands of jobs and stimulation to the local economy.

“There are many exciting developments happening in Mexicoeach and every day,” said Rodolfo Lopez-Negrete, Chief Operating Officer, Mexico Tourism Board, “Mexico continues to be a destination of choice for many people around the world and it is important that travelers not over-react to current security concerns.  It is my responsibility to tell that ‘untold’ story of Mexico.”

Many of the major resorts have reported strong tourism numbers for Mexico during the first quarter of the year.  In fact 90% occupancy rates for Easter Week based on Q1 bookings have set many resorts up for a strong 2011 for both minor and major resort operators.

It is also worth noting that several major hotel chains are investing in Mexico and are set to open new properties in the near future.  Just this past week, the W Hotel Chain announced plans to open properties in Mexico City and Riviera Maya by 2014 and Hilton Worldwide signed a franchise development deal with GS Consorcio Hotelero S.A. de C.V. for the DoubleTree by Hilton Queretaro.

This four-story, new-build property, which is scheduled to open in Q2 2011, is anticipated to be the first DoubleTree by Hilton hotel to open in Mexico, followed by additional locations opening later this year in Merida and Mexico City. 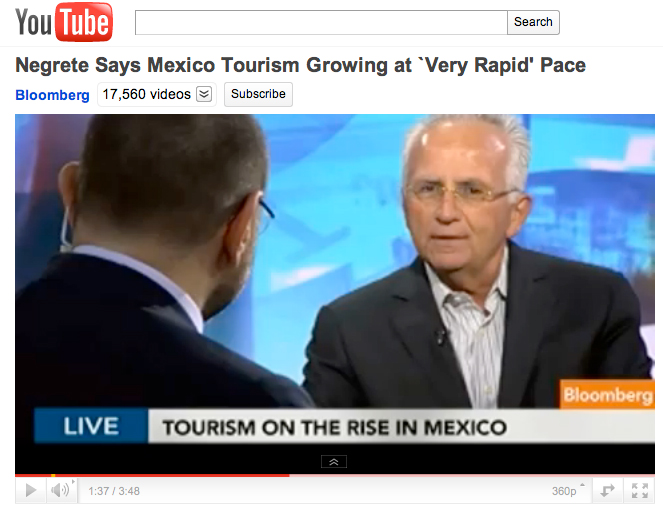 It is also an exhilarating time in Cancun – where the destination will soon celebrate its 41st Anniversary.  Since its inception, this well-known destination in the Caribbean is often seen as an important place where international and national tourists can be provided with a true taste of Mexican culture.

Expedia, the largest online travel agency in the world, has revealed its plans to expand its revenue manager ranks in Mexico in 2011, after analyzing new booking data on Mexico.  Parsing data from more than 90 Expedia and Hotels.com websites around the world, Expedia said bookings to Mexico have risen 25% over the last year, with the majority of the demand coming from the UK, Canada and the U.S.

According to Expedia, the number of Mexico hotels participating in Expedia and Hotels.com sites climbed 30% in the last 12 months. Out of these, more than 120 have been listed on Expedia’s exclusive list called ‘Select’.

“We have continued to see many consumers pick Mexico as a travel destination of choice despite these uncertain times.  Mexico has the attractions, culture, experiences and most importantly, value that our travelers are seeking,” Terry Dale, President, USTOA.

Several airlines including Virgin America, most notably, recently launched nonstop flights from San Francisco International toCabo San Lucas back in December 2011. Many airlines are considering increasing their routes to Mexico – including American Airlines and Continental.

Mexican tourist destinations are safe and Mexico continues to be the number one destination for Americans. As the U.S. Department of State has noted, “millions of U.S. citizens travel safely to Mexico each year,” including “at least one million U.S. citizens who live in Mexico”. We just finished Easter week with over 90 percent occupancy rates in most of the destinations and without any incidents related to tourists.

The current advisory in place is an extension of the advisory that was issued in late 2010. Authorities in Mexico are working closely with the destinations pointed out by the travel advisory to ensure that there is necessary infrastructure in place to address any safety concerns.

Last year more than 22 million foreigners visited Mexico and internationally-celebrated destinations in the country. Mexicocontinues to be a top destination for foreign visitors.

Most of Mexico’s tourism destinations are located many hundreds of miles away from the Mexico/U.S. border where the majority of the reported incidences have occurred and we ask all our visitors to exercise the same safety precautions they would use when visiting any tourism destinations within or outside their own country.

At this time, Mazatlan and Acapulco are currently undergoing a period of transformation as infrastructure modernization; security and business development continue to be a key focus.

“We recently found that of our foreign tourists that visit Mexico in 2010, 98% of those travelers often return and recommendMexico as a destination of choice,” added Lopez-Negrete.  “We encourage anyone considering a vacation in Mexico to speak to any of the millions of visitors who chose to vacation at our destinations last year, and are planning on visiting again next year.”