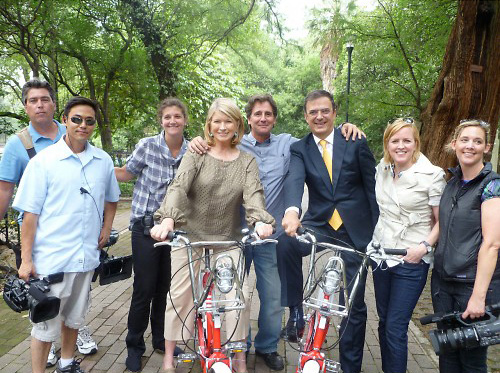 Mexico City shines in the spotlight of Hallmark Channel’s Emmy- winning program, “The Martha Stewart Show,” when the domestic diva takes her prowess on the road to experience the food and design of North America’s largest city.

The one hour special episode, premiering Wed., Nov. 2, 2011 at 10:00 a.m. ET/9:00 a.m. CT, showcases the contemporary culture of the ancient capital by going behind the curtain to unveil the traditions that inspire the city’s A-list chefs, architect and artisanal artists.

From indulging in street food and visiting artist homes, to bike riding through one of the world’s most expansive urban parks with Mayor Marcelo Ebrard, Martha Stewart enjoys the hospitality of Mexico City and explores like a local.

Renowned for being one of the top culinary destinations in the world, Mexico City is a haven for foodies and who better to bring those dynamic qualities to life than Martha Stewart?

An impressive lineup of award winning local chefs, including Patricia Quintana of Izote, Martha Ortiz of Dulce Patria and Ricardo Munoz Zurita of Azul Condesa, show Martha and her audience the unexpectedly conventional qualities of Mexico City that contribute to their creative genius.

America’s favorite hostess also navigates the expansive local food markets that house everything from meats and fruits, to colorful varieties of chiles and dried mole, as well as the famous street food carts offering traditional corn and fruit preparations.

Creativity in design and architecture is a fixture of Mexico City life. Internationally acclaimed architect Fernando Romero, most notably known for the Soumaya Museum that opened this year, personally welcomes Martha into the eye-catching museum where he speaks of his current marvel and other influential Mexico City architectural greats, such as Luis Barragan.

Taking a modern twist on ancient crafts, Martha joins Maggie Galton, interior designer and product developer, for a firsthand demonstration on how she preserves the traditional craft techniques by fostering sustainable growth of artisans in rural Mexican villages.

The dedicated episode was filmed in Mexico City in July 2011 with the support of the Mexico City Tourism Promotion Fund. “The Martha Stewart Show” production was hosted in partnership with St. Regis and Sheraton Maria Isabel Hotel & Towers.

In addition, significant time and resources for developing the show were provided by Izote, Dulce Patria and Azul Condesa, as well as Maggie Galton Artesenal Design and Fernando Romero.

“The Martha Stewart Show” airs nationwide on the Hallmark Channel at 10:00 a.m. E.T./9:00 a.m. CT
or visit www.marthastewart.com/martha-stewart-show to watch the episode online.