SAN FRANCISCO, Nayarit, Mexico — As the sun eased into the silky blue hammock of the Pacific Ocean, Frank Smith, a barefooted U.S. expat, braked a dune buggy by the palm trees on this pristine village beach.

He hoisted a Styrofoam cooler and dumped out the unlikely contents: not tequila or Coronas, but a cascade of coarse sand and three dozen palm-sized sea turtles.

Heading unerringly for the surf, the 36-hour-old hatchlings will return to the beach in a dozen years to lay eggs — that is, if there’s still a beach on this fast-growing coast north of Puerto Vallarta.

I’m rooting for the turtles. And for the whales. Magnificent 40-ton humpbacks use these clear, warm waters as a nursery each winter, lolling and leaping in what humans would call pure joy. Seeing them is part of the magic of visiting this laid-back village, but development is just around the bend. 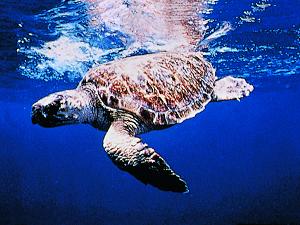 As Puerto Vallarta sprawls northward into Nuevo Vallarta, on the border of Nayarit state, a lot more dune buggies and coolers will follow.

On a late January visit we explored several alternatives to the fabled “Love Boat” destination. The hotel-crammed city on the Bahia de Banderas, Mexico’s largest bay, seems to scream “spring break,” with all-American brands from Hard Rock Cafe to Starbucks crowding a frayed ribbon of sand. But within an hour of downtown, we found coastal towns that were reassuringly cheap, funky and friendly.

San Francisco, dubbed San Pancho by locals, was our first stop. A 20-mile drive just north of the bay, it lives up to its rep as the most spectacular beach on the coast.

Our taxi driver Arturo, cheerfully, promised a quick trip over the mountain, but the Pan-American Highway — here, a two-lane road — slowed our progress. “Did I say 35 minutes?” he asked cheerfully, after a half hour. “It’s one hour!”

The steep jungle hills gave way to a small bridge that rumbled as we crossed into town, passing horses and dusty cars. Big translucent waves thundered on the beach as we walked into a palapa — a hut with palm fronds for a roof — and were promptly handed a beer.

The palapa was the breezy cafe of Costa Azul, a small adobe hotel on the edge of town. We liked its offer of an “adventure package” that let us kayak and snorkel offshore at no extra charge. (The adventure also included a complete non-communications package: no TVs, phones or Internet.)

Another freebie: the whales. As we swam in the surf, a shout from the beach alerted us to a humpback surfacing in the distance. The next day we saw several more, from a distance of 100 yards, as we approached the Marietas Islands on a motorboat.

A national wildife sanctuary protects blue-footed boobies and other birds on these volcanic rocks. Evidently they resent visiting snorkelers, dousing a few of us with guano as we anchored in a calm cove.

San Pancho is beginning to protect wildlife, too. Thanks to Frank Smith’s efforts, more marine turtles are surviving here each year.

In this poor village of 1,400, locals used to eat the turtle eggs they collected from the beach. But in 2000, when the highway opened, construction of new hotels, condos and businesses in the region boomed.

“Suddenly, everyone who wanted a job could have one,” Mr. Smith told us. Families had paychecks, kids began to learn turtle ecology at school, and Mr. Smith built a turtle nursery (the sand-filled coolers) to protect the eggs. “In 1991, we had 200 nests,” he told us. “Now we have 900.”

Tourists have boosted business along San Pancho’s cobblestoned main street. A half-dozen shops and cafes have opened along Tercer Mundo.

On the beach, vendors offered silver jewelry with English one-liners. “Cheaper than Wal-Mart!” insisted one.

We dined on tiny, delicious tacos at Las Delfinas, a takeout window with a few tables on the street, for $5, and splurged at La Ola Rico, ending a fine dinner with sweet homemade flan, for $65.

A solo tuba concert at a fiesta in the town square and a quiet walk on the beach were the only choices for San Pancho nightlife.

In Sayulita, five miles south of San Pancho, the streets and the beach were far more lively. The town pulls surfers with a reputation for big waves, but we saw only flat seas and big crowds. On the beach, crowds of young Americans overflowed the cafes.

Overflowing was the word for the beach, and many of the bathing suits, in Puerto Vallarta the next day. On a Sunday afternoon, every inch of the beachfront malecon (boardwalk) was jammed. We threaded our way along the promenade to the Playa los Muertos new pier, heading south to Yelapa. The fishing village on the southern tip of the bay can be reached only by water taxi.

Dodging diving teenagers, motorboats and fishermen, a ponytailed cop in bathing suit and with a cell phone tossed our luggage into a 20-passenger boat, and we jumped aboard. Halfway through the 45-minute trip, the captain throttled back, shouting to the crew and pointing. More whales?

This time, the attraction was not ballenas, but calamar. The captain circled back to a five-foot squid in the water, hooked it, and threw it into the boat.

It didn’t move. Our captain had just picked up the equivalent of road kill and was cheerfully taking it home for dinner.

Our destination, another fishing village, put both the rustic and the rhyme in rustic chic. Our room on the beach was a Yelapa palapa called La Joya. The tiny hut offered good beds, running water and not much more. It made San Pancho’s Costa Azul look like the Costa del Sol.

Within 20 feet of our door (which did lock), we could clearly hear a pack of village dogs, a tree full of roosting chickens, a stable with a dozen snuffling horses, and the TV at the local cantina. The bodies inside the yoga studio next door didn’t seem to move once in the two days we passed by.

A few more steps returned us to a crescent beach, surrounded by tall green hills. Party boats from Puerto Vallarta make the trip here daily, but by evening the scene reverted to one candlelit cafe, brilliant stars and a bonfire. After dinner, local fans of a TV soap opera pulled plastic chairs up to the cantina window, which became an open-air theater.

Our early morning water taxi trip back to Puerto Vallarta was crowded with commuters, jumping onto the docks of nearby Mislomoya and Boca de Tomatlan for a day’s work. As we headed toward the city, a final whale on the horizon flipped its tail in our direction.

On the horizon here are construction, condominiums and, eventually, crowds. The glorious setting won’t change, but the surroundings will.

That’s reason enough to make like those turtle hatchlings. Head for the Mexican Pacific. But go now.