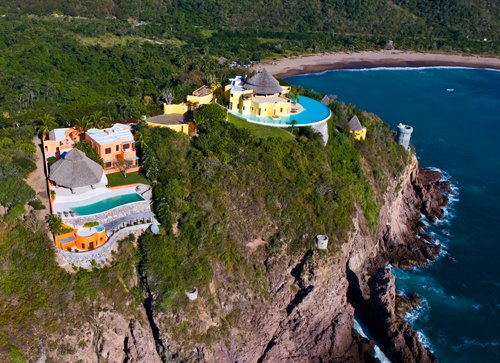 The villa of Seal and Heidi Klum in Costa Careyes

German supermodel Heidi Klum and her singer husband Seal renewed their marital vows in a Hindu ceremony on their third wedding anniversary.

India was the theme of the wedding that was held at Mexico’s Costa Careyes beach early this month. Indian priest Pandit Shailesh Tripathi was especially called from Indian holy city Varanasi to conduct the ceremony.

Apart from the ceremony, everything about the function was also Indian. For one, the wedding mandap was decorated in Indian motifs.

The bride and groom as well as the guests were reportedly dressed in Indian dresses like banarasi saris, lehenga, sherwanis and kurtas.

Heidi Klum was dressed like an Indian bride in lehenga-chunni and wore exquisite jewellery. Seal wore a black sherwani.

According to a newspaper report, Pandit Tripathi performed elaborate poojas like Ganesh pujan and Navgarh pujan. Heidi and Seal also did saat phere.

Heidi’s parents were also part of rituals like Kanyadaan (giving away of the bride) and Paon Pujai (washing the groom’s feet).

Heidi and Seal have known Tripathi since their visit to India last year. The couple was mesmerized by the Vedic mantras that Tripathi chanted in Kashi. Later, he had also conducted a special Ganga Puja (done for married couples) for Heidi and Seal.