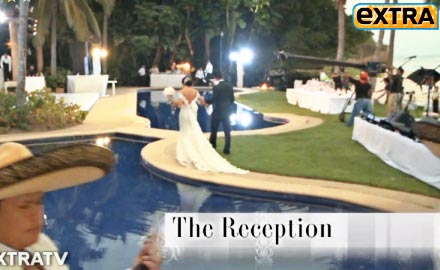 “Extra” host Mario Lopez and bride Courtney Mazza tied the knot in Punta Mita, Mexico (at the house of Joe Francis of Girls Gone Wild) on Saturday and we’ve got all the video highlights from their wedding day!

See the bride and groom before and after the ceremony, the dress, flowers and first dance! Before the ceremony, Courtney said, “I love you and I’m so proud to become Mrs. Lopez” and Mario added, “She’s just gonna look like a Disney princess today.”

Courtney walked down the aisle wearing a dress designed by Ines di Santo, and her 2-year-old daughter Gia looked adorable in a dress that matched her mother’s. Mario and Courtney escorted their little flower girl down the aisle.

Under a white gazebo by the ocean, they exchanged vows that they wrote for one another. The ceremony was officiated by a catholic priest.

Guest Eva Longoria called the ceremony “beautiful” and couldn’t be happier for her longtime friend. She told “Extra,” “I was so happy to see Mazza walk down the aisle in that beautiful gown and to see Mario crying made me cry. It was so emotional and beautiful.”

A traditional mariachi band welcomed the new Mr. and Mrs. Lopez into their reception where the newlyweds shared a very special dance to Otis Redding’s “These Arms of Mine.”

The party was filled with dancing, a special performance by Courtney and Andy Grammer, and fireworks. The festivities continued into the night, ending with a dip in the pool.

The entire event will be featured in “Mario & Courtney’s Wedding Fiesta,” which premieres Saturday, December 8 at 8:00 PM on TLC.