Cuixmala Sister in Colima, Hacienda San Antonio is Shangri-La in the Dust

In the shadow of a volcano, a 19th-century Mexican hacienda might just be the most exclusive hotel in the world. 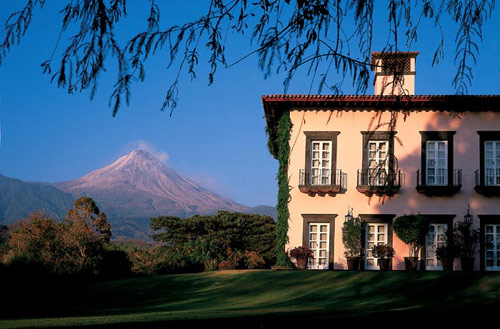 From Claridge’s in London to the Villa d’Este on Lake Como, there is no shortage of elegant places to stay the world over.

But if you want a vacation that involves the art of discovery and none of the usual suspects will do, then you must go deep into the highlands of Mexico to the Hacienda de San Antonio.

Located less than two hours inland from the Pacific coastal city of Manzanillo, the 19th-century coffee plantation–cum–palatial private residence–cum-hotel is a dreamlike vision of formal architecture in a wild and dramatic natural setting.

The Hacienda’s sister property is the more widely known Cuixmala, the luxurious compound south of Careyes that international billionaire Sir James Goldsmith built as an exotic hideaway in the late 1980s. Its eye-popping main villa, with concentric domes of polychrome tile, is now the jewel of a unique seaside resort owned and run by his daughter Alix.

But fewer know of this remote gem, which also belonged to Goldsmith. The Hacienda, with its pale pink stucco walls, rows of balconied French windows, echoing courtyards and Baroque chapel, was acquired from descendants of Goldsmith’s onetime father-in-law, Bolivian tin king Antenor Patiño, who was famous for the splendor of his lavish lifestyle.

Renovated and restored to its original glory by the great French interior designer Robert Couturier, today it boasts rooms decorated with superb Mexican and European antiques, endless formal gardens, an aquamarine pool and a rooftop terrace for dining under the stars.

This is an isolated location, so a long weekend should do it. If you would prefer to avoid the bumpy drive from Manzanillo, the concierge will send a private plane to fetch you, landing on the grass airstrip at the property. Not only is the Hacienda the epitome of rustic elegance but it allows travelers the opportunity to indulge in the sporting life.

You can spend all day on a horse, galloping across grasslands and through tunnels of bamboo. But ultimately the Hacienda de San Antonio is wonderful because it’s a secret. Don’t worry if you don’t know anyone who’s ever been there. If it was good enough for Patiño and Goldsmith, it’s probably good enough for you.