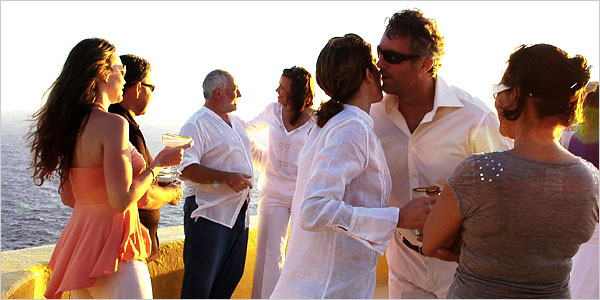 A sunset cocktail party at Costa Careyes, a laid-back luxury getaway in Mexico favored by many celebrities.

THE sun was setting above Costa Careyes, a luxury development on the Pacific coast of Mexico, and as it lowered into the foam-capped sea, its light was refracted through a massive, puzzling structure on the dunes that looked like Freddy Kruger’s knifelike finger nails.

Among the accommodations are colorful casitas. The out-there creation — actually the beginnings of a giant sculpture of an upturned hand — was that of Gian Franco Brignone, the eccentric Italian-born financier and artist who founded this exclusive beach community in the late 1960’s. He had invited two dozen or so guests, who now stood obediently with their margaritas on his terrace, to watch the quasi-spiritual spectacle.

Such was a typical early evening cocktail hour in Careyes, well known among jet-set internationals and fashion-world inhabitants but hardly, it seems, by anyone else. Which, of course, is the point for frequenters like Giorgio Armani, Francis Ford Coppola, Uma Thurman and Heidi Klum and Seal, who own a villa here.

A laid-back, word-of-mouth alternative to hard-charging party spots like St.-Tropez or Punta del Este, Careyes is small (there are only 42 villas, 40 casitas and one hotel — El Careyes Beach Resort) and conspicuous consumption is considered déclassé. There is no marina for yacht envy, nor an airstrip, and not only are there no designer boutiques and glitzy nightclubs, there’s not even a town.

The crowd here tends to be young, or young at heart, wealthy and on the make. During the Christmas-to-Easter polo season — yes, there’s an up-to-date polo facility, a big draw for European and South American playboy types — lavish dinner and cocktail parties unfold in the villas, which rent for up to $6,000 a night for their infinity pools, sprawling thatched roofs and open-air living areas with steep cliff-side views instead of doors or windows.

The parties often stretch into the wee hours, with well-dressed revelers plunging into the pools, hot tubs or the silk-textured ocean. (The mysterious invitations to these late-night gatherings arrive via the house managers who do double duty as blue-chip social connectors.) As at a surrealist country club, after several nights of these boozy fetes you still have no idea what these people do in the real world, and it’s considered bad form, after all, to make such direct inquiries. Which was why when I visited last January, I kept racing to the computer at my hotel’s business center to Google my new best friends. If only the Internet had existed during Gatsby’s time!

“Careyes draws a very affluent international crowd, but they are more attuned to aesthetics then status,” said Tim Parsa, a businessman and writer in his 30’s who lives in Mexico City and Manhattan and goes to Careyes for the polo. He was perched in a shaded corner of the beach typing a screenplay on a laptop one recent morning. “Here people aren’t overwrought with that aggressive pursuit of a good time,” he added.

Mr. Brignone developed Careyes as a leisure-class utopia where social standing would be measured by eccentricity and caftans, not big yachts and golf courses. He discovered the eight-mile stretch of land on a tip from a friend, Antenor Patino, the Bolivian tin baron who developed Las Hadas, the luxury resort featured in the movie “10.” Mr. Brignone commissioned architects like Marco Aldaco and Diego Villasenor to build a handful of brightly painted, whimsical Mexican-Mediterranean-style bungalows. One villa, Casa Mi Ojo, in homage to Mr. Brignone’s missing left eye, has a hanging bridge suspended 90 feet above the ocean that leads to a little island and a huge eye carved into the side wall with a pupil that doubles as a peephole window.

(Sir James bought land down the coast in the mid-1980’s and set up his own private Xanadu called Cuixmala for his extended clan and guests, who included Henry Kissinger and Ronald Reagan. He died in 1997, and Cuixmala is now run by his daughter, Alix Marcaccini, as a 32,473-acre biosphere reserve and an exclusive estate-and-breakfast, where guests like Madonna and Mick Jagger rent out the apocalypse-proof Indian-themed palace, La Loma, for $9,000 to $15,000 a night.)

A few more villas have been added at Careyes over the years, but you still rarely see another car or person on the cobblestone streets that laze past the lushly planted mansionesque villas with names like Parasol and Candelabro. Strolling on the beach one warm starlit night, my traveling companion and I happened upon a dinner given by Ms. Marcaccini. A long table for 40 lighted by torches and sprinkled with bougainvillea and copa de oro had been set up on the main beach by the charming pink and thatched Italian restaurant that’s the nexus of the social scene. Both beach and restaurant are named
Playa Rosa

The guests, a whirl of slender shoulders draped in shawls, clinked glasses of red wine and margaritas in a scene that could easily have been airlifted in from a fashion show afterparty in New York or London. They included the model Jacquetta Wheeler, the English fashion designer Alice Temperly, the actress Minnie Driver and the actor Danny Huston.

“Celebrities like it here because it’s private, and there’s no paparazzi,” said Viviana Dean, who manages several of the villas. “People looking for a glitzy, loud vacation tend not to want to come here anyway. ”

During the day the best eye candy is at the Playa Rosa beach, which plays out like a jet-set version of “Gilligan’s Island.” Just-rolled-out-of-bed guests begin to show up around noon and lounge on the straw mats strewn about on a lush green lawn shaded by big stately palms. Sun chairs, umbrellas and jet skis are not allowed by Mr. Brignone. I didn’t see a single pair of designer sunglasses or logo beach totes. Instead the statement tended toward a label-free array of exotic muumuus and wraps that looked like they were from far-flung medinas and bazaars.

At lunchtime, groups slipping into and out of English, French, Spanish and Italian pulled up to tables under a shaded patio at the restaurant and ordered delicate salads, ceviche and half portions of risotto. The very rich often don’t carry cash so the restaurant’s manager, Augusto, is always forgiving bottles of Pellegrino and margaritas, especially for bikinied women.

There are several little rocky islands that are close enough to the beach to swim to. We were told that one had a human nest built by the Sky Cries Mary singer-turned-sculptor Roderick Romero, who fashions elaborate tree houses for clients who have included Donna Karan and Sting. We decided to swim out, but as we made our way through the clear warm water, we were intercepted midway by some handsome men in a Zodiac outboard who invited us for drinks and backgammon aboard their boat followed by a helicopter ride over the area.

After a few days, we had stopped being surprised by such idyllic social encounters. It was just another day as usual in Careyes.