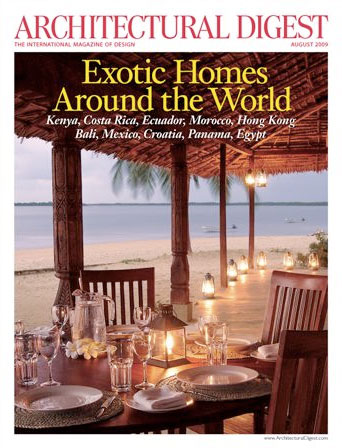 A COMPOUND IN PUNTA MITA OPENS TO THE PACIFIC

Mexico is a country of exuberant visual procession. Its zocalos, or central plazas, are filled with elderly couples strolling arm in arm, roving children eating ice cream, romantically inclined young women and men encircling each other beneath string lights and Mylar balloons.

The sense of life eloquently unfolding is also an essential element of contemporary Mexican architecture. And so it is in a tropical residence for a Los Angeles couple and their family designed by the Mexico City architect José Vigil in Punta Mita, on Banderas Bay north of Puerto Vallarta, a coveted peninsula known for nine and a half miles of white-sand beaches and the local dive, the Four Seasons Punta Mita (see Architectural Digest, July 2000).

Situated on a deep lot, the compound is conceived as a sequence of open patios and sheltered interior spaces leading inexorably to the sea. The husband, a recently retired television executive who is originally from South Africa, has christened the house Beidisia, a phonetic interpretation of an Afrikaans phrase that means “by the sea.”

“We wanted to avoid the kind of house that’s typical in the city, where living takes place in one structure,” says Vigil, who works frequently in Punta Mita and Ixtapa as well as Mexico City. “The idea was to enjoy the site and the weather every time you move through the house.”

The residence consists of six separate structures linked by overhead trellises crafted from tropical parota wood and shielded from summer rains by glass deftly concealed in the latticework. The formal, sculptural entrance, with its gravel plaza, leads to a soothing interior courtyard surrounding a shallow pool—a hearth plaza where it’s possible to sense the ocean “even though you’re not on the beach,” says Vigil.

In Mexico City, Vigil—who goes by the nickname Pepe—is involved in a foundation devoted to the historic home and studio of Luis Barragán, the late Pritzker Prize-winning architect, whose sense of space and light reverberates in the residence. “What’s interesting for me about Barragán’s work is the poetry of the space, the different emotions it provokes when you walk through,” he says.

Throughout the property, terraces and double-height ceilings capture the sky and ocean breezes, inviting cross ventilation without the need for air-conditioning and bringing in the sensuous sound of rustling palms. Wood shutters—a typical element on the Mexican coast—part to reveal sets of glass doors and sliding screens that ward off mosquitoes. All open gloriously onto the water, a glistening azure nursery for humpback whales and olive ridley sea turtles.

For the executive, the heady mix of the tropics and pristine beaches proved irresistible. He and his wife, who have two surfer daughters, discovered the architect by way of his local residential work and his “cliff” and “beach” villas for the Four Seasons. “We wanted a comfortable, simple-lined home,” the executive says. “The location of the property, about 35 feet above the beach, gave us this huge vista. We wanted the house to be about that big open light and space, with just a few materials and tones drawn from the colors of the garden and the sea.”

The couple collaborated with Adriana Olmedo, a Mexico City interior designer. In Oaxaca they shopped for the region’s celebrated ceramics and art; while in Los Angeles they zeroed in on a sofa that makes cameo appearances in several rooms.

Materials are similarly consistent—the travertine flooring is “cool and easy to walk on barefoot—it also looks like the color of sand,” says Vigil. A signature of the architect is pull-out-the-stops indoor-outdoor showers—all have private patios enlivened by a spiky brigade of aloe vera plants.

The executive somewhat sheepishly says he showers indoors, however. “From me to you, I enjoy looking up at the blue sky and architectural details of the marble walls.”

The family makes weeklong pilgrimages five or six times a year, “walking on the beach, having long conversations and hitting the odd golf ball,” he says. “We have a room for movies we never use.”

The result of José Vigil’s design is a conventlike tranquility worthy of Luis Barragán. In his acceptance of the Pritzker Prize, Luis Barragán lamented that “the words Beauty, Inspiration, Magic, Spellbound, Enchantment as well as the concepts of Serenity, Silence, Intimacy and Arrangement” had vanished from public discussions on architecture. But in this residence “by the sea” in Punta Mita, those long-lost words live on.

EXPLORE LIFESTYLE OPTIONS IN PUNTA MITA, STYLISH GATHERING PLACES AND THE FINEST AMENITIES TO ENERGIZE YOUR BODY AND SPIRIT.

Owning at the Punta Mita Resort

Punta Mita offers ample opportunities to enjoy artful leisure, with stylish gathering places and the finest amenities to energize your body and your spirit.

Active-minded residents can enjoy a variety of water sports, from deep sea fishing and diving to surfing and kayaking, as well as land activities that include championship golf, tennis, mountain biking and hiking.

Based on the membership associated with your home or rental property, you will be able to use the following facilities and amenities of Club Punta Mita.

The private Punta Mita Golf Club is open only to Punta Mita property owners and their guests, and guests of Four Seasons and St. Regis Resorts. Members enjoy access to the comfortably appointed clubhouse, which offers dining, bag storage and other amenities. This is the place to meet your friends—and play.

Its “Tail of the Whale,” an optional, par-three 19th hole measuring 199 yards, features the only natural island green in the world. The course plays between 5,037 and 7,014 yards. Click here to tour the Pacifico course hole by hole.

The newest addition to Punta Mita’s golfing achievement, this second Jack Nicklaus Signature Golf Course opened in late 2008 and is as stunning as its sister course.

Featuring six ocean holes and playing between 5,180 and 7,030 yards, this championship course rolls through the property of the St. Regis Resort, and among the communities of El Encanto, Porta Fortuna, and La Punta Estates. The challenging and undulating fairway and green complexes offer a wonderful counterpart to Pacifico for golf afficionados. Click here to tour the Pacifico course hole by hole.

A variety of fun and exciting tennis activities await at The Punta Mita Tennis Club. Managed by Four Seasons and Peter Burwash International, the recently expanded Punta Mita Tennis Club offers 10 courts – a combination of hard surface and synthetic grass courts—lighted for evening play. In addition, enjoy an apparel and equipment shop as well as men’s and women’s locker rooms.

The Premier Fitness Center, for Club Punta Mita members, features Technogym® cardiovascular and machine weight equipment that allows a comprehensive fitness regimen. Men’s and women’s locker and shower areas allow for a relaxing finish to your workout, leaving you refreshed and energized.

A WORLD OF WATER SPORTS