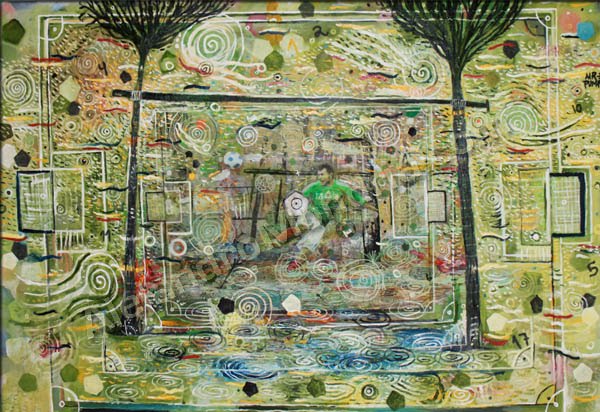 Alejandro spent his childhood in Mexico and Switzerland.

He graduated from the prestigious Rhode Island School of Design, USA and then studied on a years’ scholarship at the Instituto Piazza Cenci in Rome, Italy.

His work has been featured in galleries and museums in USA, South America, Europe, China and Africa.

He has also been included in collective exhibitions in museums throughout Mexico including a major solo exhibit at the highly respected Museo de Chopo in Mexico City in 2004. In 2007 Mondria was invited by an association of galleries in Beijing to participate in a festival promoting interaction between artists from all over the world.

This endeavour inspired his involvement with digital art as well as his installation pieces of large dimensions . 2010 brought the prestigious opportunity to represent Mexico at The Football World Cup in South Africa. Alejandro was invited by FIFA to create a piece that reflected his style and imagination of what the games meant to him.

“Until Reality” was on tour in capital cities throughout the world and its 120 reproductions were signed .

Today Mondria has a large international collector base. He resides near Punta Mita on Mexico’s Pacific Coast.

The sea has always represented a vital force in his life. One of the main elements of his work is water and the way it interplays with light whilst portraying the solitude of the journey of the human condition.

The art of Alejandro Mondria could be summed up in two short phrases “Seeking the infinity of innocence” and “Examining the beginnings of the eternal”.

His canvases are generally multi layered with heavy texturing. Sometimes he will have over thirty layers of paint on a work.

The canvases are layered in a combined effort of building up the texture whilst scraping away paint for the lower layers to show through.

He often reworks paintings several times in the pursuit of the universal visual dialogue that he is seeking. Sometimes the ghost of the former image might be allowed to reveal its ethereal presence as part of the new creation, yet within the specific focus towards the eternal.

Mondria covers a great deal of subject matter exploring many diverse scenes in a variety of techniques in formats that range from small 6’’x 6’’ pieces to striking 90’ murals. The general themes of family, parental love and one’s life journey are part of a larger tapestry that forms Mondria’s body of work always with a specific focus on the eternal.

He usually integrates a naive image of a sailboat, or its basic outline. The boats have become integral symbols of his paintings and they represent his philosophy that “life is a navigation,” a journey.
“A sailboat floats, sometimes propelled by the wind, sometimes caught in a lull but always floating in the unfathomable vastness of the ocean”.

Some of the paintings have faces reflected from the water that act as a self portrait in the most sublime sense.

Many have an old photograph collaged onto the canvas. All act as a focal point simultaneously guiding and mapping the path to unravel a particular visual journey.