The tiny plane that had remained dark and quiet since departing Houston was suddenly quieter as the pilot reduced engine power and the nose of the aircraft began to tip downwards. 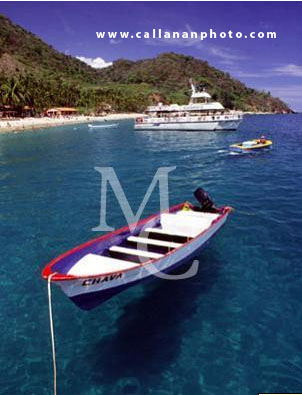 With this cue, window shades were lifted and the blinding sun of a Mexican afternoon saturated the cabin. Eyelids were forced open just in time to view the approach; our plane skimming across the Sierra Madre mountain range, reaching a civilization made up of red-tiled roofs and white sun-washed houses, and then suddenly the blue immensity of the Pacific Ocean stretched before us.

Puerto Vallarta is a small Mexican city most famously known for being the place where Elizabeth Taylor and Richard Burton, pursued by gossip reporters and paparazzi, flaunted their love affair while Burton was filming “The Night of the Iguana” in 1963. It wasn’t until we were driving along the winding coast of Mismaloya, and our driver shouted, “Over there is where they filmed ‘The Night of the Iguana,'” that I knew this.

I felt a hint of guilt after remembering that I played the Hannah Jelkes part, Deborah Kerr’s character in the film, in an acting class in college.

After eight days exploring, relaxing and chatting with the locals, I can say that Puerto Vallarta definitely holds its own, iguana or no iguana. Puerto Vallarta, or simply “Vallarta,” as it is often abridged, offers a variety of extreme sport and extreme relaxation opportunities.

This colorful resort town sits on the west coast in the state of Jalisco, making beach-going at sunset a must every night.

One night, while watching the sunset, my friend and I saw a sudden flurry in the corners of our eyes.

An army of black bats silhouetted against an orange sky rushed out of the eaves of our hotel’s roof, flying in unison towards the ocean. Every night at dusk, the bats made their escape into darkness. A small spectacle, but it had us checking our watches every evening to see if we missed it.

Arriving after an entire winter hibernating in the north, our first two days were dedicated to some much-needed beach time. Be sure to bring a sunscreen with a high SPF. The sun is strong, and be careful what you have covering you when you fall asleep in that beach chair. I woke up with my own handprints on my stomach, which was a great conversation starter the remainder of our trip.

The beaches in Puerto Vallarta offer something for everyone. If you just want to laze around in the sun or read a book, the hotel beaches north of the city offer a serene setting. If you are looking for more ocean-front excitement, downtown Puerto Vallarta is the place to be. The city is nestled on Mexico’s west coast and the beaches here are bursting with restaurants, bars, and shopping. There is artwork lined up along the shore on easels, adding to the vibrancy of the promenade and sandcastle artists sculpting giant works of art, often with religious themes. My favorite was an interpretation of Leonardo da Vinci’s “Last Supper.” If you take a lot of photos, leave a propino(a tip).

When you are fully rested and beach bronzed (and hopefully not burned), take a couple of excursions. Our first adventure trip was chosen by my friend. I soon found out he was not afraid of a little danger, and nervously agreed to accompany him on a canopy tour at El Eden, a park in one of the jungles south of the city. El Eden also happens to be the set of the 1987 movie, “Predator.” Scary.

After our tour leader and zip-line extraordinaire, Pedro, explained the technicalities of the harness, the braking method and basically how not to fall to our death 300 feet into the canyons below, we ascended to the first level. Piece of cake, I thought, after safely making it to the other side. The photograph taken of me as Pedro pushed me into my first flight may prove otherwise. Complete terror.

They lost a sale there.

With 12 zip-lines total, the group hiked higher and higher into the jungle, until we were zigzagging across the canyon at 40 mph, screaming out of fear and pure exhilaration over the tops of trees and waterfalls. Beautiful, an all-embracing adrenaline rush, and something I never thought I would do.

The next day, we hung up our zip-line harnesses for a couple of horse’s harnesses. After coasting past the shore of Puerto Vallarta on a boat and snorkeling at Los Arcos, we hopped on shore at the small fishing village of Quimixto. Before I even set foot on shore, a man met me as I was navigating across the rocky floor of the bay. One look up and there it was, the local celebrity staring me straight in the face; the infamous iguana. The man dropped the legendary lizard in my arms and for 50 pesos ($5) I was allowed to have my photo taken with it. A bargain.

A couple of margaritas later, we rented some horses for a ride to a waterfall. The horses were small and easy to handle, so effortless in fact, the man from Alberta riding in front of me held a Corona in one hand and a camera in the other. Mounting a horse with flipflops was the only challenge. After riding through the countryside with the sun on our backs and weaving through narrow forest paths, we arrived at a scene that rivaled any postcard for sale at the hotel gift shop.

The towering waterfall was an extraordinary sight, but perhaps even more impressive were the lofty heights from which people were cliff-diving into the deep pool below. I sat this portion of the adventure out, wading in the refreshing waters and chatting with other señoritas, while my friend shimmied up the rope that aided in tackling the vertical precipice.

Without hesitation he swung his arms back and made the plunge amidst cheers from the crowd of bathers below; and yes, he made it.

Puerto Vallarta is a photographer’s dream. Taking a short walk through downtown, I discovered a picture around every corner. I even photographed things that I now wish I had tried. From Sunday mass at Our Lady of Guadalupe church — we had to stand outside because of our shorts — to the giant whole fish or giant prawns cooked on sticks at beachside grills. I also wish I had purchased just one goofy souvenir off the street, since Puerto Vallarta may be the world capital of plastic frogs, figurines and other fun kitsch. Instead, I settled for Cuban cigars. I suppose I will have to plan another trip, but until then I always have that iguana photo.