During a recent international event in Mexico, a handful of lightweight questions were asked about illegal immigration and emigration, with the basic response to the latter by government officials boiling down to the often heard “Mexicans have the constitutional right to travel when and where they chose.”  And the milquetoast questioners let this answer slide without clarification, challenge or follow-up. 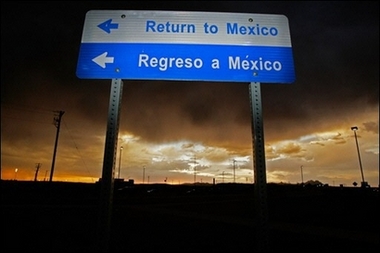 The Mexican Constitution does in fact grant citizens freedom to travel, including abroad, however it also stipulates that the right to cross border migration is authorized only if other applicable laws and requirements are observed, and when certain prerequisites have been met.

The following articles and excerpts are taken from the Political Constitution of the United Mexican States; the General Population Law; and the Regulation of the General Population Law, in order to give those interested some comparative insight into three documents from Mexico’s body of laws regarding migratory matters.  Extracts and items that are yes cherry-picked, however all points that stand on their own while being integral parts of the documents, intent and enforcement responsibilities they represent.

The Mexican Constitution, under the heading Individual Guarantees in Title One, Chapter I, states in Article 11: “Everyone has the right to enter and leave the Republic, to travel through its territory and to change residence without the need of a security letter, passport, safe-conduct or other similar requirements. The exercise of this right will be subordinate to the powers of judicial authority, in cases of civil or criminal liability, and to those of administrative authority with respect to limitations imposed by the laws on emigration, immigration and general public health of the Republic, or with regard to pernicious foreign residents in the country.”

Article 33, after mentioning guarantees granted to foreigners in certain other constitutional articles, still gives authorized federal officials the exclusive power to summarily order deportations. And its concluding sentence says: “Foreigners may not, in any way, meddle in the political affairs of the country.”

The General Population Law (and its Regulation) is basic to the topics being reviewed herein.  Furthermore, the Law names the Secretariat of Government (SG), or Interior, as the primary and responsible authority over many populace related and most migratory matters.

As to emigration, in agreement with the Constitution (and in spite of what some people may claim or imply), while having the right to travel and migrate, Mexican citizens are not entitled to cross international borders – outgoing or incoming – without valid documents.  Meaning official authorizations and travel documents that must be obtained beforehand, once the requirements and conditions established by the Mexican government are met, approvals that are also in keeping with Mexico’s international accords.

Article 7, point II, of the 157 article General Population Law, requires the SG “to supervise the entry and departure of nationals and foreigners, and to review their documentation.”

The exclusive responsibility to establish marine, air and land ports of entry and/or exit is given to the SG in Article 10, this following talks with other ministries and agencies that must provide personnel at the sites.  Article 11 specifies that international travelers and migrants entering or leaving Mexico may do so only at designated sites and during set hours.

In the Regulation of the General Population Law, Article 100, point IV, requires the SG to exert whatever vigilance is necessary over locations that are not authorized for international crossings, this through the deployment of migration officers and Federal Preventative Police.

Back to the General Population Law, next Article 13 states: “Nationals and foreigners, in order to enter or leave the country, will have to meet the requirements obligated by this Law, its regulations and other applicable requirements.”

Article 15 requires Mexicans, on reentering the country, to prove their nationality and, if deemed necessary, to submit to a health examination.

In Chapter III of the Law, titled Immigration, Article 34 reads as follows: “For foreigners who may enter the country, the SG will be able to establish conditions it deems suitable with respect to activities they will devote themselves to, and the place or places of their residence.  As well, it will see to it that the immigrants [are] useful elements for the country, and that they will receive the income needed for their subsistence and, as is the case, that of those persons who may be under their economic dependence.”

With respect to marriage and children, Article 39 allows the SG to authorize foreigners who marry Mexicans, or have children born in Mexico, admission or a lasting stay in the country.  However if the marriage is dissolved, or if the foreigner ends his or her support, the SG will be able to cancel their migratory status and order deportation unless the person has permanent resident status or is granted new status.

Chapter IV deals with Emigration, with Article 77 defining emigrants as “Mexicans and foreigners who may leave the country with the intent to reside abroad.”

Article 78 requires: “Those persons who intend to emigrate from the country must satisfy, in addition to the general migration requisites, the following” – and there is a list of five obligations.

They must be identified and present corresponding personal data to migration officials; and be of legal age [18] or accompanied by persons with paternal authority or guardianship, or with an approved authorization from the parents, a legal guardian or qualified authority.

In the Regulation of the Law, the departure rules regarding underage Mexicans or foreigners are expanded.  Article 215, points I and II say that minors must be accompanied by persons with paternal authority or guardianship, or with a permit ratified by the parent, guardian or an authorized official.  Valid passports, held by underage Mexicans leaving the country unaccompanied by their parents or a guardian, will serve as proof of consent.

Regardless of age however, point III in Article 78 of the Law states: “If it is a question of Mexicans, proof is required that they can meet all entry requisites that the laws of the destination country require.”

Point IV requires formal applications for documents that once issued and obtained must be presented to departure point immigration authorities.  It also states that emigrants cannot be on trial, out on bail or fugitives from justice.  The concluding point notes that other applicable requirements must be met.

Mexican seasonal workers, “guest workers,” are covered in Article 79, which requires proof that a worker has been seasonally contracted with a salary sufficient to meet his or her needs.  Labor conditions must be approved, in writing, and Mexican consular officials will review workplaces where services are to be rendered.  In the Law’s Regulation, Article 213, point II, calls for the SG to insure that contract processes for guest workers are carried out with due respect for the human rights of the workers.

Regarding the collective transportation of seasonal workers, Article 80 of the Law requires SG personnel to oversee the transfer to make certain rules and regulations are followed.

Chapter VIII defines sanctions for public officials, migrants and others who commit transgressions.

And Article 127 inflicts a penalty of up to five years in prison, plus a fine of up to $5,000.00 pesos [US$467.00], on Mexicans who marry foreigners for the sole purpose of allowing them to stay in the country.  Furthermore, the same sanction will be applied to the foreign bride or bridegroom.

Article 138, in its four paragraphs, sets sanctions for those who traffic in people.

It begins by saying that a penalty of six to 12 years in prison, and a fine calculated at from 100 to 10,000 days multiplied by the general minimum salary in effect in Mexico City [$52.59 pesos per day, or US$4.91, for 2008], will be imposed on those who themselves, or through third parties, with the intent of trafficking, try to or do take Mexicans or foreigners into another country without the corresponding documentation.

The second paragraph imposes the same penalties on traffickers who themselves, or by using others, seek to bring undocumented foreigners into Mexico, or transport or lodge them on national territory in order to hide them and thus avoid migratory inspection.

Next sanctions are imposed on those who knowingly aid and abet that described in the two preceding paragraphs.  And the fourth paragraph multiplies the penalties when undocumented migrants are underage; if conditions or means used place migrants health, integrity or life in danger; or whenever the perpetrator of the crime is a public servant.

US Escrow vs. Mexico EscrowNearly One Million Americans Living in Mexico
Scroll to top